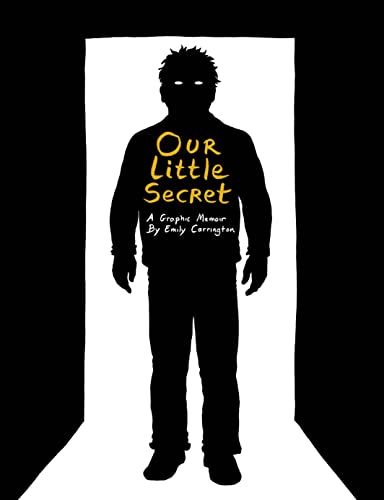 “a map for others on the power of storytelling . . . writing and drawing her way to liberation”

This is a brave story about a girl whose childhood was scarred by adults letting her down. Her mother terrified her, her father neglected her, and a neighbor sexually abused her. Nobody protected her when she needed it most. Still, somehow this isn’t an unremittingly bleak book, as it easily could have been and that is due to Emily Carrington’s consummate skill in the graphic novel format. She draws her rural childhood as full of bucolic moments and is generous in how she describes her clearly dysfunctional parents:

“I had a mom and a dad. They tried to bring us up the right way. They really did try. . . . But things were crumbling. And as time went on, the decay seemed to speed up.”

From a middle-class home in New Brunswick with two working parents, things go downhill until her mother leaves with her brother and Emily ends up in a dilapidated farmhouse with her unemployed father. In this new home, she meets their neighbor, Richard, the man who ends up grooming and abusing her. Carrington captures with brave honesty the trajectory of Richard’s manipulation:

“Once, though, at a party, he danced a little too close. It felt weird to me. And yet, I was so starved for love at home, it felt good at the same time. I wanted his approval. And I thought to myself: Wouldn’t somebody say something if it was wrong?”

As a prose memoir, this would be tough to read. It’s not easy as a graphic memoir, either, but the format gives the reader air. The full black pages separating chapters provide both a pause and visual emblem for the darkness of the story. And Carrington’s clarity helps. She’s clearly done a lot of work on healing her pain and brings that understanding to her descriptions. The worst isn’t even the physical aspect—it’s the control Richard holds over her, even after the abuse stops:

“But he was still in my head. Lying dormant for years. Making me keep his shameful little secret. It was like a stone I had to carry with me. Buried deep in my mind.”

Two major things help Carrington: First she shouts out the secret, breaking Richard’s insidious hold. She even goes to the police, hoping to have her abuser prosecuted for rape. When the police refuse to prosecute, she doesn’t give up but hires a lawyer to start a civil suit. The law fails her though, and Carrington can’t find justice in the courts.

Instead, she finds it more powerfully within herself, by telling her story, writing and drawing her way to liberation:

In this way her graphic memoir provides a map for others on the power of storytelling. Nobody can control what she puts on the page, how she uses words and images to shape her narrative, to make sense of her world.

“So now that I have written it all down, the law of storytelling has to kick in. The rule that the main character always triumphs. I must succeed and complete my journey. This is the point in the story when I should magically reach my goals. And you know, I actually believed that once I drew this part of the story that my lawyer would call and say it was all over. . . . The weight would be off my shoulders . . . In this story, the main character fails. . . . So then maybe my journey is to fail to get justice, and to still not give up.”

Telling a story, Carrington shows, takes its own kind of courage, and reaps its own deep rewards.