Our First Civil War: Patriots and Loyalists in the American Revolution 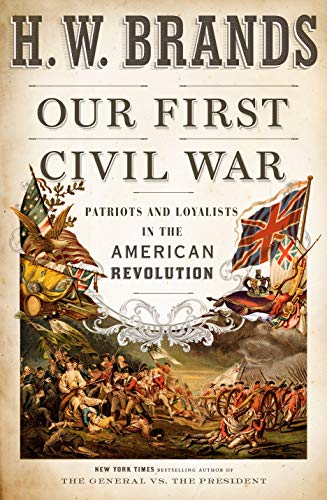 “A reader, even one familiar with the history of the American Revolution, will find much to enjoy in this book with interesting details to learn.”

H. W. Brands begins Our First Civil War: Patriots and Loyalists in the American Revolution by noting the exceptional horrors of the American vs. American war in the South. Yet the author does not clearly explain why the encounters described relate to the presumed subject of this book. For the rest of the text, this book hardly mentions that brutal struggle in the South that accounted for a large portion of the total casualties of the whole war.

Loyalists or Tories, Americans who supported the king also find only passing mention in Our First Civil War and usually in the worst light. A quote from George Washington, for example, accuses the Loyalists of covering the country in blood. Benjamin Franklin argued for gold to pay for provisions from Tories. He refuses to protect those Americans who supported the British cause in the negotiations for the Treaty of Paris to end the American Revolution.

More words are spent on desertions from the American army than on the Loyalists of all colors. No real discussion here on why Americans would choose either side besides something like a retelling of the familiar story of Benedict Arnold.

The first chapters of the book recounts the often told history of George Washington during the Seven Years War on the American frontier with the French soldiers and the Indians years before the American Revolution. “Washington, the former soldier, had no problem with armed resistance” when the American Revolution came. It also includes the familiar account of Benjamin Franklin’s colonial Albany Plan and his other efforts to save the Pennsylvania frontier for the British Empire during that same colonial conflict.

Our First Civil War then takes the reader on a journey through other major historical events of the war but not the civil conflict. The reader will have difficulty figuring out why or how this material relates to the title of the book (even after reading the introduction).

Such history, even if often told, does make for an important understanding of the coming of the Revolution. These chapters show that colonists’ “the image of British indomitability vanished”? But to what purpose in this book? Why would that be important to understanding Americans killing Americans?

The author does consider, in passing, African Americans and Native Americans as Loyalists, however. “Washington overruled the recommendation of Benjamin Franklin . . . against recruiting Black troops.” Joseph Brant famously led one group of these Indians, but there were other leaders and waring bands of different tribes.

This book works as an entertaining, if disjointed, general and traditional history of the American Revolution. Our First Civil War tells the story of America vs. Great Britain through the experiences of Franklin and Washington with appearances by such famous characters as John Adams, Benedict Arnold, Joseph Galloway, and the Howe brothers.

Our First Civil War could have been a dual biography of Franklin and Washington in the Revolution. Such a history could have argued that Franklin and Washington did not betray their king but that they themselves were the betrayed, and how that even influenced how they felt about Americans who did not join them in the cause of American independence.

The story telling in Our First Civil War is entertaining and the prose is clear and concise. A reader, even one familiar with the history of the American Revolution, will find much to enjoy in this book with interesting details to learn.

A book on the theme represented in this book’s title, built on the scholarship of Dr. Robert M. Calhoon and others, however, could make a valuable contribution if it told this history of Americans fighting Americans across the 13 rebelling colonies/independent states.

Such a work could give detailed accounts of the Loyalists of all races and contrast them with their patriot neighbors. It would include the Americans who served in the king’s army, the broad situation with the Native Americans, losses in the war, and how Loyalist African Americans spread revolution to Jamaica and Sierra Leone.

Our First Civil War illustrates the works that purport one idea but follow others. It has color illustrations and annotation.