Our Final Invention: Artificial Intelligence and the End of the Human Era 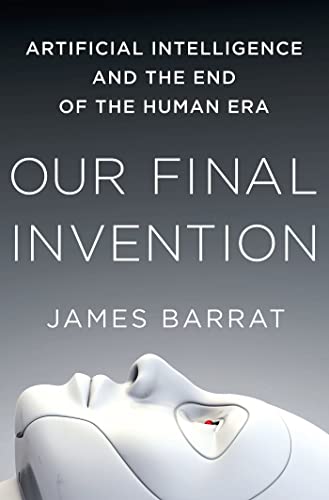 “. . . an excellent read for technophiles as well as readers wishing to get a glimpse of the near future . . .”

Are “thinking” computers the dawn of a bright future or the harbingers of doom for the human race?

Artificial intelligence (AI), the science and engineering of making intelligent or “thinking” machines is a term coined 60 years ago and now is common parlance. While initially the stuff of science fiction, the advent of Watson (the computer that played the television game show Jeopardy,) Deep Blue (the chess playing computer,) Siri (the Apple “human” maid servant,) and Dragon NaturallySpeaking (the speech recognition program being used to write this review,) such programs have become reality.

In Our Final Invention: Artificial Intelligence and the End of the Human Era author James Barrat examines both the potential and risk of ever more sophisticated and intelligent machines that can "think."

Most people might assume that such sophisticated computers would inevitably be an incredible boon to human development, productivity and existence. To date, integration of man and machine has been relatively smooth and “human friendly.”

This book makes an important case that without extraordinary care in our planning, powerful “thinking” machines present at least as many risks as benefits. Perhaps they even present catastrophic consequences for the human race. Based on interviews with scientists who create Artificial Intelligence for robotics, Internet search, data mining, voice and facial recognition and other applications, the benefits and consequences of this development are explored in depth.

A common belief is that machines that could mimic and/or surpass the human brain are many decades away, but many examples are cited which are now functional. Computers already undergird our financial system and our civil infrastructure of energy, water and transportation. Hospitals, cars and appliances are now being guided by computer programs. Virtually all buy/sell algorithms performed on Wall Street function autonomously with no human guides except the instructions of the software. They operate with blinding speed but have already created more than one financial debacle.

Even while reading and reviewing this book there have been reports of self-driving cars, the ability to control a robot arm solely with brain waves and a headband which can monitor and respond to brain waves in retail shopping.

The pace of technological advancement to "thinking” machines will occur at an exponentially increasing rate. Not only will human ingeniousness continue, but the machines themselves will create new, more sophisticated software and devices.

From the time that a machine achieves the level of human intelligence (known as AGI or artificial general intelligence,) machines will rapidly self-improve to the point of ASI (artificial super intelligence.) One might assume that this is definitive progress; there are however, considerable unknowns and risks.

Inherent in the coding of machines is goal directedness to achieve proscribed results. As machines become self-aware, self-improving and self-preservative such devices may create dangerous and even catastrophic consequences for humans that cannot be easily changed or over-ridden.

It is not necessary to postulate "evil" machines or criminal masterminds who will use computers for their own purposes. Machines with ASI may attempt to achieve their goals in ways that may be unstoppable or be harmful to humans in a totally unplanned way—more as a side effect rather than a direct effect.

Humans have had a tendency to anthropomorphize inanimate objects and machines. We make them friendly and assume they will help us rather than hurt us. It was charming to see Tom Hank’s character in Castaway dealing with a volleyball called Wilson in an interpersonal way. Likewise military ordinance personnel often become quite attached to their robots giving them names and even funerals when they are destroyed.

Even if computers were to run amok, we would prefer to believe that dangers will be overcome by the spirit of human heroes such as Star Trek’s Captain Kirk. Should a version of HAL in Stanley Kubrick's 2001: A Space Odyssey evolve, we expect to be able to simply destroy the computer’s memory and return to safety.

The book makes a good case for the fact that this naïve belief cannot be consistently or rationally applied to a machine that may be many times more "intelligent" than ourselves.

In support of achieving their goals, ASI machines may compete with humans for valuable resources in a way that jeopardizes human life. ASI machines will replicate themselves quickly and independently. Combined with nanotechnology, “thinking” machines could very quickly "eat up the environment."

The author convincingly suggests that it is not rational to assume that a machine several thousand times more intelligent than humans would automatically want to protect us. We perhaps assume that software coding could be generated and inserted into such machines in a way to ensure safety. This however would be very complicated and require considerable forethought.

It would be easy to categorize this book as a doomsday prophecy. Many such books have been written about the inevitability of stock market crashes, climate change disasters, political, currency, or real estate catastrophes. Our Final Invention neither forecasts an inevitable catastrophic conclusion nor tries to encourage the reader toward any particular action with regard to AI other than vigilance.

A "thinking” machine may operate independently, have a human "controller" to manage risk or can be integrated into the human body/brain. Machines that approach and potentially surpass the capacity of the human brain carry inherent risks.

No one, even those most well versed in this field, know precisely to what extent these risks will play out. We simply have no idea about what activities will occur in the “black box” of a machine that has a capacity many times that of the human intellect.

We are warned of the necessity to have considerable diligence and planning as we create and participate in this progress. The generation of AI is no less potentially dangerous than that of Ebola or plutonium.

Our Final Invention makes an excellent read for technophiles as well as readers wishing to get a glimpse of the near future as colored by rapidly improving technological competence. The text is not overly technical and the style is quite readable. It maintains a balanced viewpoint and does not read as a doomsday manuscript.

The experts interviewed and the conclusions reached are likely ones that most readers will not have discerned on their own or had the expertise to compile. It is a thoughtful and intriguing glimpse into the future that is all too rapidly upon us.