Before Our Eyes: New and Selected Poems, 1975–2017 (Princeton Series of Contemporary Poets) 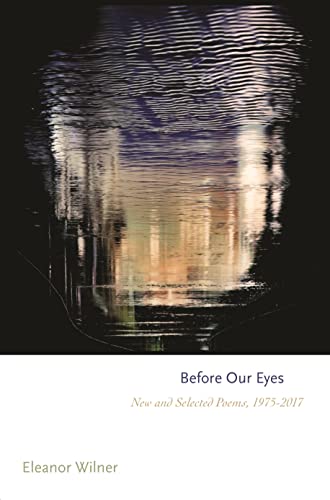 “travels beyond faith into politics and the soul.”

What an utterly lovely book this is! Eleanor Wilner’s poetry is carefully crafted and shimmers with all the magnificent potential of language. The book begins with new poems, divided into three movements, which by themselves constitute a magnificent collection. This is followed by briefer selections from her previous seven volumes, reviewing her work in brief back to 1979. It’s a rare opportunity to engage with a 40-year span in the work of a major poet.

Wilner’s earlier works stand up after decades in print. Much of her early work engages with the mythological. “Iphigenia, Setting the Record Straight,” belongs to the now fairly established tradition of revising Classical myth to center on women. Wilner’s Iphigenia, though, is charming. Her account conveys a wry sisterhood that echoes in Margaret Atwood’s The Penelopiad, published more than 25 years later.  Iphigenia recognizes the difference between the myth and the woman behind it: “Helen, as the second version goes / had stayed at home; only the echo / of the rustle of her robes / went with Paris to the high-walled town.”

The overview of Wilner’s career is a fine resource, but the real wealth of this book is her new work. Her grasp of poetic technique is staggering. Poems abound in the modern world, but few feel so carefully crafted as these do. In the midst of modern political horror and disgust, Wilner offers a poem at once allegorical and direct, “The Photographer on Assignment (Election 2016).” In Alaska, lemmings amass and an owl hunts: “the lemmings / stand revealed; they don’t conceal themselves / but hope to warn their predators away / with their small, fanged aggression— / easy targets, all.” The allegory isn’t overt, and the politics are ambiguous, but the poem’s sense of impending annihilation feels urgent and crucial.

The subsequent piece, “Parable of the Eyes (Post-election 2016)” shifts its allegory from the realm of nature to a more surreal, existential horror: “and the eyes, locked in / the heartland silo, suddenly blink / and open wide, and all they see / are other eyes / in all that darkness / staring back.” What emerges in a morass of fury and memory’s absence, if not these quiet, staring monsters?

No review can truly capture the shape of these poems on the page. Wilner’s subtle incorporation of the concrete draws the eye and forces the mind to pause in unexpected blank spaces. A heron “[w]ading    in the shallows    of America / on a fall day     the sun bright    and trying” stretches in lines across the page. The pattern is abstract, apparently free, and only coalesces into a new layer of meaning when the reader steps back to take a breath after finishing the words.

The sequence new work concludes with a return to Wilner’s long-established interest in Classical mythology, in “Voices from the Labyrinth.” Minos speaks, then Ariadne, Dedalus, and finally Minotaur, who encapsulates myth in sharply truncated lines: “now you see who we are / tangled in / the spiraling threads / that curl/ round and round / the central / axis / of the double helix / along / the nucleotides / of creation / where the past / is always / with us . . . .”

In craft, in sound, Wilner’s writing recalls Dylan Thomas’. Her rhymes are subtle, buried, yet audible even to the mind’s ear. And yet, to Thomas’ careful sonic constructions she has added a deep discomfort that travels beyond faith into politics and the soul.