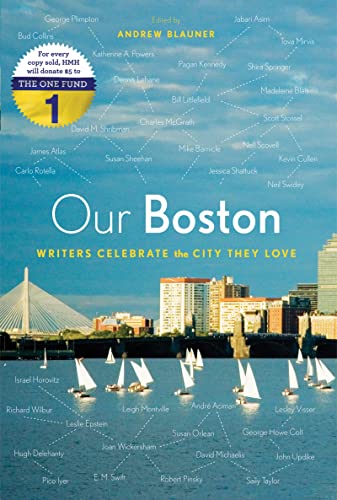 John Winthrop may have been the first person to describe Boston. In 1630, borrowing from The Sermon on the Mount, he preached to the future citizens of Massachusetts that their new community would be a “city on a hill,” a city watched by the world, a city that would be a shining beacon of exceptionalism.

And he was right.

In the wake of the 2013 Boston Marathon bombings, Andrew Blauner has commissioned original essays and reprinted others from Boston area writers who try to explain the uniqueness of the city.

The most impressive ones may be those told by outsiders. Those writers that have been able to view the city through the lens of one who has lived many places, but Boston captured something special for them.

On Boston’s long held reputation for racism, Jabari Asim says in “Transplants,” he had a lot of advice on why he and his family should not to move to Boston.

“You know, it’s cold up there,” warned a friend who’d spent most of her winters in Chicago.

And when Asim gets here and refuses to acknowledge the idiots that shout the n word at him, he remembers how the same thing happened earlier that year in his hometown of St. Louis, jerks live everywhere.

Carlo Rotella writes about how the city feels right: “proportional, human-scaled, pleasingly irregular densely layered with my own and others’ lived experience.”

But the writers who live here permanently write lovingly of home.

John Updike’s essay “Hub Fans Bid Kid Adieu” on the last game of Red Sox great Ted Williams includes two phrases that will live as long as Winthrop’s. Fenway Park is described as a “lyric little bandbox” and understands why Williams did not come out of the dugout to acknowledge his last at bat—a home run—despite a beseeching crowd: “Gods do not answer letters.”

A nice reminder of how funny George Plimpton could be in “Medora Goes to the Game.” As a father Plimpton wants his daughter to root for his alma mater, Harvard, but he’s fighting an uphill battle. His daughter’s favorite color is blue (Yale), Y is her favorite letter, and the mascot of Harvard is a Puritan, while Yale has a cool bulldog. Harvard loses this game, (which brings on the melancholy chant we’re number two from the sideline), and later they read a sign SO WHAT IF YOU WON, YOU STILL GO TO YALE.

Pagan Kennedy writes about the still relevant concept of “A Boston Marriage” and James Atlas reminisces about the wonderful times he had wondering around the bookstores of Harvard Square.

Not every essay is mesmerizing, and there could be more poetry, but this is a deserving read, and five dollars of every purchase goes to the One Fund, to help the victims of the bombings.