Our America: A Photographic History 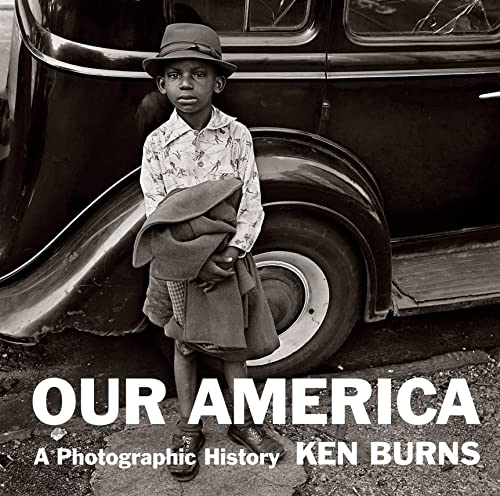 ”Our America elevates us to the stars while simultaneously pulling back the curtain to reveal our scars. The images can be edifying or terrifying.”

In Our America: A Photographic History, the renowned documentarian and historian, Ken Burns, has carefully created and curated an extraordinary collection of approximately 250 iconic black-and-white photographs. The images Burns has chosen chronicle the almost 200 years in which photography became an invaluable resource to depict and document the uniquely American experience. Chronologically presented, the images begin at the dawn of photography with a daguerreotype self-portrait of Robert Cornelius in Philadelphia in 1839. The final picture is a 2019 portrait of the late Congressman and civil rights icon, John Lewis, in Washington, D.C.

There are moments in our history that are soaring and uplifting, as memorialized by a photograph of the first flight of the Wright Brothers at Kitty Hawk in 1903. But Burns chooses to counter-balance that glorious moment with all that is sobering and all that is disturbing in our history as well. We cannot escape our darker tensions, which Burns documents by including photographs of slaves and slavery, the dispossession and dislocation of indigenous peoples, Civil War dead on the battlefield, the relegation of women to second-class status, and the forced incarceration of Japanese Americans during World War II.

As Burns writes so eloquently in his introduction: “It is our intention, without nostalgia or unforgiving revisionism, to gather up in these images the generous and the greedy, the prurient and the puritan, the sordid and the sensational, the hideous and the humorous, the miserable and the miraculous.”

Burns has written a surprisingly candid and emotional introduction to Our America. He presents a beautiful tribute to his professor at Hampshire College, the esteemed photographer, Jerome Liebling, who served as a mentor and an inspiration to Burns throughout his career. In fact, Burns dedicates the book to Liebling and graces the cover of the book with one of his professor’s photographs.

Burns has divided Our America into four sections. Following his introduction there is an enlightening essay “A Powerful Monument to Our Moment” by the noted photography curator, Sarah Hermanson Meister. Meister observes, “The need to reflect on our history through photography is one that seems ever more urgent.”

Burns recognizes this urgency and then starkly presents the photographs he has selected with minimal identifying information. Burns only includes the location and the year of the photograph. His clear intent is to challenge the reader to slow down and concentrate and to spend time with each photograph as an isolated experience without any textual references other than time and place.

Only in the fourth section of the book, entitled “Illustration Notes,” does Burns provide thumbnails of the photographs accompanied by several paragraphs of backstory that provide an historical explication and a contextual explanation that together justify the author’s choice of the photograph for inclusion. Burns also provides information as to the photographer, when identifiable, and to the archival source of the photographs.

Upon viewing the photographs, the reader is confronted with the recognition that our shared history can be profound or profane, and our past is sometimes glorious and sometimes ghastly. These are the contradictions that Ken Burns presents in a photographic review of our past.

One particularly haunting photograph shows from a distance a line of people, including children and women in their Sunday best, who are standing in a row proudly on a bridge, as if in celebration, in Okemah, Oklahoma in 1911. One man even acknowledges the camera with a wave. It is only on closer examination of the photograph that it becomes clear that there are ropes dangling below the bridge leading to two bodies hanging by their necks. In the “Illustrated Notes” Burns reveals that in May 1911 a mother, Laura Nelson, and her teenage son, L. D. Nelson, were kidnapped and hanged from a railroad bridge over the North Canadian River. (Incidentally, there is a typo in the caption as to the correct date of the photograph.)

One particular irony of this horrifying photograph of a racist lynching is that all the reader has to do is flip back one page to find a peaceful photograph of two women, also finely attired in long dresses and hats, looking at a spectacular landscape in Glacier National Park in Montana in the early 1910s.

On these two consecutive pages one can experience and confront the contradictions and the conundrums of looking at our history through the filter of photography. One picture is beautiful, the next is brutal. Ken Burns does not hesitate as he holds up a mirror and asks us to recognize that our American past can be heroic or demonic, splendid or sad.

Unfortunately there is a typo in the caption regarding the date of the Oklahoma photo, but an even more egregious typo occurs in a note to a portrait of a young Charlie Chaplin in Hollywood in 1916. In the “Illustrated Notes” Eugene McCarthy is identified as the U.S. Senator who in 1952 branded Chaplin a communist. It was Senator Joe McCarthy. This lack of editing is a surprising lapse in an otherwise meticulous project.

America and Americans are capable of extraordinary achievements and of great cruelty as well. We have soared and prospered and become the envy of the world, driven by new ideas and remarkable innovations and inventions. Simultaneously, we have sometimes descended to the depths of depravity and despair. We have dressed up for church on Sunday or dressed down under the white sheets of the Ku Klux Klan.

Ken Burns asks us to marvel at the beauty of our landscape while remembering the people who were here first and who were dispatched with lies and deceit or quite often murder. Burns asks us to glory in our shared history and successes while acknowledging the enslaved peoples and the maligned immigrants without whose labor and sweat the American dream would likely have died.

Our America elevates us to the stars while simultaneously pulling back the curtain to reveal our scars. The images can be edifying or terrifying. Burns chooses to not prettify our American history or to de-sensitize his readers.

Our America is an unflinching portrait of our shared visual markers through time.

Burns confronts us with all the complexity, the contradictions, and the contributions of the American experience with the genius of an historian and the compassion of a humanitarian.

He reminds us we are a divine country, but often a divided country. At this critical juncture in our history, Burns has produced a brilliant historical photo album of great conscience and of great consequence.