The Other Woman: A Novel 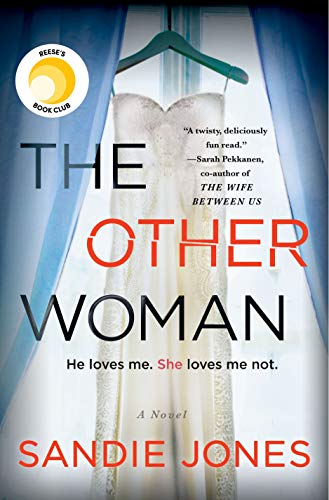 British author Sandie Jones brings out her debut crime novel The Other Woman as one of the creepiest “fall in love and step into danger” books ever. With a tang of Stephen King in its horror passages (especially his title Misery), this book requires a good light on and the doors securely locked. Because, yes, it’s terrifying.

Jones provides a half-page prologue in the voice of someone who’s going to make sure a wedding doesn’t happen. Then she leaps to the opening of the first chapter, which puts the possibility of trouble right out front, in Emily’s view: “There weren’t many things that I didn’t like about Adam when I first saw him across the crowded bar at the Grosvenor Hotel in London, aside from his lack of empathy. I’d just come out of an incredibly dull ‘Future of Recruitment’ conference and needed a drink far more than he or the barman realized.”

Emily Havistock, whose voice and point of view take over the rest of this thriller, believes she’s found the man of her dreams in Adam. He’s perfect (she’s willing to set aside that strange lack of empathy), tender, adores her. She adores him.

But there are secrets in his past and his family (a doting mother, a close brother) that keep tripping Emily into waves of doubt. What’s the story on the woman Adam expected to marry earlier in his life, Rebecca, whom he “misses every day”? Is James trying to warm Emily that Adam can be hurtful? And how should they handle Adam’s mother Pammie, who’s doing so many things to make Emily ill at ease and even to capsize the planned wedding? Emily tries to talk this through with Adam’s brother James:

“‘Any ideas on what we can do about your mother?’ I asked, aware that I might be crossing a line. I screwed up my face as I waited for his response.

‘She’ll get over it,’ he said softly.

I smiled. ‘I don’t think it’ll be anytime soon. You know what your mum’s like. She’ll drag it out for as long as she can.’ I wasn’t sure whether I’d meant to say that out loud.

‘Her bark’s worse than her bite,” he said, after a long pause. ‘She’ll come around.’”

But what if Pammie had something to do with the earlier death of Rebecca? What if Emily now wears that target herself? And—gulp—would the target also apply to other people Emily loves, including a possible infant? More pressing, why isn’t Adam doing anything about this? How can he let Pammie repeatedly exclude Emma from “family photos” and more? Her heart’s breaking.

Of course, Emily has a few secrets of her own, one of whom shows up for the “hen party” before the wedding. Gulp.

Read this one as a page-turner, a creepy set of circumstances that keep getting more threatening. Don’t expect depth of character, and don’t expect to “solve” the crime, as Jones hasn’t set up the plotting for reader access to the truth until the final twists take place.

That said, it’s intense, compelling, and very British, a good palate-cleanser to restore a full range of flavor after watching too many sweet happy-every-after films (newly released The Guernsey Literary and Potato Peel Pie Society?) or kindly books (this is much more aggressive than even the darkest Agatha Christie!). And The Other Woman proves conclusively that Hitchcock’s talent for threat and terror in the unfolding of each scene can just as well emerge in this up-to-date and clever London author.