The Other Walk: Essays 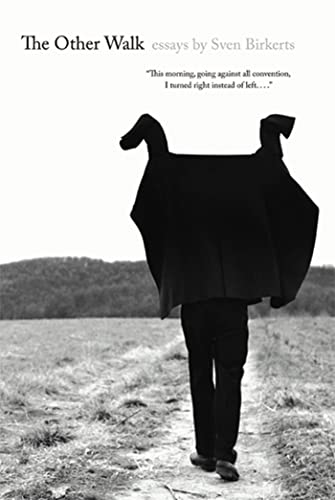 “And while the idea of a life consisting of essays might intrigue, The Other Walk does not.”

Is there anything as studied, as airlessly self-conscious as a writer writing about becoming and being that thing, that overwhelming, overweening bête noir: a writer? Like Katharine Hepburn trilling out her various interpretive reads of “The calla lilies are in bloom again,” in Morning Glory, played on an endless loop, but with words typed on the page and not spoken, with slender arms wrapped around those damned imaginary lilies.

Perhaps better yet, it is like Jack Nicholson at work, in the movie adaptation of Steven King’s The Shining: “All work and no play makes Jack a dull boy,” typed again and again, filling page after manuscript page, looped endlessly, endlessly—as it is the repletion that gives the moment its potency.

Such it is with The Other Walk, a collection of what the author has chosen to refer to as essays, by Sven Birkerts, who no less than David Foster Wallace has called “the most interesting and persuasive critic in the United States today.” Here, the repetition consists largely of hours spent and then recreated at the Charing Cross bookstore—not the one made famous by the wonderful Helen Hanft, but, instead, one that is named in homage and lodged in Ann Arbor, Michigan—and of moving to Maine with Sally in the mid 1970s and, especially, of sentences like:

“I moved to Maine to undertake the writing life, and after two years, battered, I returned to Ann Arbor.”

This last leaves the reader mystified and questioning. As to just what the “writing life” consists of? And how it is geographically determined? And what exactly “battered” him back to Michigan, the winter or the fact that opportunities for writers in the state of Maine are regrettably few? Or something else entirely?

On poking his eyes through The Other Walk, the reader concludes that, where some might see essays, this reader sees data.

The data of the everyday life (“This morning, going against all convention, I turned right instead of left and took my circuit—one of my circuits—in reverse,” begins the first piece, entitled “The Other Walk.”) writ rather small. It is as if all that data had been baked into a dense, rather dry cake, covered in a white icing consisting of mostly oversweet memories, then got all sliced up and served to the reader a piece at a time.

In other words, these are shards of a memoir, and yet not a memoir itself. And while the idea of a life consisting of essays might intrigue, The Other Walk does not.

Too much of the work consists of rather listless reportage (albeit in the most poeticized prose), such as this, which opens the essay “Tomcat” (itself a teeth-grinding celebration of animal cruelty):

“In 1979 I was living in Ann Arbor, sharing an apartment which my then girlfriend Pam, a third-story space shaded by tall trees, with an old-style wooden fire escape that came right up to our large kitchen window to create a kind of deck.”

To which, perhaps, the appropriate response is, “How nice for you.” Or a general overall statement of the author’s apparent popularity with women. But little else.

And too much of the memory seems wielded with the intent of punishing the reader. With a contemplation of the first name of his first girlfriend of his freshman year in college. Or of the horror the author feels when cutting when he meant to paste and losing his unsaved document to a blinking cursor dancing over a blank page as a result. Or of the moment of clarity in childhood in which he realized that his family was not the center of the world as he had always believed.

Too little of the work contained here reaches the level of “The Ladder” in which the clarity of the writing receives the sweaty-palmed response, as here, when Birkerts climbs to the top of a high ladder to pain a house, keeping his eyes level and focused on the house in front of him as he climbs:

“Suddenly I can’t help myself: I turn my head just slightly to the left and I look down. Mainly to see if the man, my boss, is still there somewhere, but also because I need to know where I am. I feel a kind of thud as the scene clicks in. Ground, grass. He’s not anywhere on the left side.

“Nor—I’ve moved my head so carefully, as if that little action could make a difference—on the other. The lawn falls away in either direction, empty. I am halfway up the side of the tallest house I’ve ever seen and I’m alone. And that little twist of the neck was like breaking the seal. The calm, the focus, whatever story I was telling myself up here, is gone.”

Such a splendid moment. Not only the vulnerability of being way up high on a rickety ladder, but, worse, being left alone up there. And the idea of the simple turn of the neck being like “breaking the seal” on all the emotion locked inside. Here is an essay that is an essay. Here is writing that compels the reader, and makes the eyes speed left to right and up and down on the page.

Better still, perhaps, is “Archive,” which manages to take that cliché of a writer writing about writing and having written and breathes into it new life. As Mr. Birkerts drags all the samples of a lifetime of his work up into the attic, where “a do-it-yourself shelving unit on the other side of a plastered-in chimney column” is ready to allow for a sorting process to “mark the transition from boxes to shelf-organization” with the following result:

“I skimmed my own prose, a paragraph here, a paragraph there, grimacing but also making that ‘what do you know?’ expression that is the highest accolade of self to self. I also peed at old correspondence and—surprise—marveled at the transience of human affairs. Our lives, my life! Then, finally, at the end of the weekend, I uncracked my knees one last time and stepped back to take in what I had accomplished.

“And . . . we need a word, there must be a word—something with the imported thrust and nuance of schadenfreude or cafard—that signifies the failure of some great initiative to deliver any of its intended satisfaction. ‘Fizzle,’ I’d say, or ‘flop’—but both words sound silly and small. I’ll think of something. The point is that after all that work, after two days of purposeful high-speed self-tourism, I stood in the center of my attic feeling completely, utterly deflated.”

So the question rises: Is author Birkerts in on the joke? Does he see the “self-tourism” packed all throughout these essays? Or is this archive of memories to him something different, something sacred?

The answer, perhaps, is contained in another essay, “Reading Oneself,” which is, like all these others, written in a voice that is fully ripe and ready for vocal presentation over NPR:

“Reading myself, I recognize an obviousness that I like to think I’ve been getting past. I do believe I’m better now, further along in hacking away the approximations, more confident of what a sentence can do. All that. It’s the necessary logic of the inverse: that as we lose our best youth, we get closer and closer to real expressiveness. It’s sad, though, that we usually attack our best subjects before we know what to do with them, and attacking them wears them out for our later purposes. What to do now with all this style?”

Apparently, the answer is that all that mature style is ladled onto the merest slip of a topic—from the brown shoes given him by a dying friend to essays (yes, finally, essays) on Saul Bellow and Hemingway and the nature of poetry to yet another consideration of writers and writing, this time answering a child’s question of what exactly it is he does all day:

“I often imagine the cinema verité version of the writer at his desk. Like Andy Warhol’s Blow Job, it would be a film centered on an essentially expressionless face.”

In this rather exhaustive examination (in under 200 pages) of writers and the writing they write, Mr. Birkerts rather irritatingly forgets the writers for which writing is rather an inborn thing, involuntary, like breathing, digestion, and the heartbeat. Instead he concentrates on those, presumably like himself, who have been driven a little mad from an over-reliance on Hemingway when it comes to the definition of what the writer’s life should be.

This does yield a rather splendid little piece called “Cup,” in which, in defiance of anything Hawakawa ever wrote in Language in Thought and Action, he rather insists that the map is indeed the place:

“The red cup is the place-holder, the bookmark in what isn’t a book, and I don’t exaggerate when I say that thirty-some years later I can still see perfectly the burned-in, or crusted, irregularity at the bottom, the Rorschach blot I stared at when the last Taster’s Choice was gone, while I sat and tried to be a writer.”

That’s the thing: that “tried to be a writer.” As if it were an act of will; the result of drinking too much coffee. In insisting upon this as simple reality, Sven Birkerts would make Tracy Flicks of us all.