The Other Side of Prospect: A Story of Violence, Injustice, and the American City 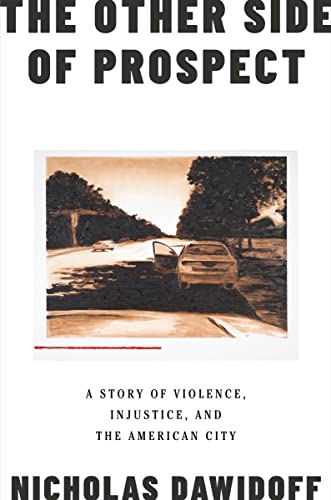 Nicholas Dawidoff set out to tell the story of a tragic miscarriage of justice in a small New England city. A young African American man in the crime-ridden New Haven, Connecticut, neighborhood of Newhallville was charged with robbing and murdering an older man who was sitting in his car with a pocketful of money.

The crime was in 2006, and evidence pointed to another man with a long police record as the shooter, but an ambitious police detective who boasted of a 100 percent clearance record “liked” Bobby (the only name he has in the story) and an accomplice for the murder. Bobby was only 16 and had had the most minor skirmishes with the law, but under intense questioning he folded and confessed to the crime. When new evidence surfaced, again strongly implicating the other man, Bobby signed his name once more to a new confession that conformed to the emerging evidence. After a quick conviction (there was a confession, after all), Bobby served nine years in a Connecticut prison before being exonerated through the efforts of a dedicated lawyer.

For the most part, crimes like these barely make the papers. New Haven had 25 homicides in 2021, the most since 2011, when the number was 34. But Dawidoff spent eight years researching this case and delivered a major work of reporting. The book, at over 400 pages of smaller type, was deemed too long for an index or notes, though both would have been welcome.

Readers will learn a lot from The Other Side of Prospect. The details of African American migration from the South (in particular, South Carolina) to escape Jim Crow are here, as well as an in-depth look at New Haven policing, the loss of the city’s industrial base, and Newhallville’s subsequent deterioration. We also get intimate portraits of Pete Fields, the thoroughly decent victim; the likely murderer (“Major,” who was himself murdered before he was brought to justice); Ken Rosenthal, Bobby’s beyond-devoted lawyer; and—at great length—Bobby himself.

Dawidoff appears to have been everywhere: with Bobby at family gatherings, in jail and court, and through his long and very uneven reentry, job interviews and all. Movies about freed prisoners tend to end at the prison gates with a triumphant walk to freedom, but this book keeps going after the homecoming party ends. In jail since he was 16, Bobby has trouble negotiating a new world of cell phones and online employment applications. And he struggles with depression.

Dawidoff, himself a New Haven native, is not a character here. He’s an observer, and he seems to miss very little. Set aside a good block of time to read the book, which a good editor could have judiciously shortened. But nothing here feels extraneous or needlessly digressive. The author felt compelled to go down the paths he did because they’re what made Bobby who he is and shaped his city as well.

Prosect Street is a dividing line. On the other side of it from Newhallville is the leafy enclave of Yale University. Dawidoff doesn’t fully flesh out the town-gown relationship, but he makes it clear that the elite school hasn’t always been very involved in its surrounding community. As a kid, Bobby would bicycle down Prospect, and see it as a fairly firm barrier that, because of police harassment, he was not necessarily welcome to cross. But many other parts of New Haven were unsafe for him, too.

The book has a melancholy tone, and it seems unavoidable. Newhallville, which lost its major job base when gunmaker Winchester and other major employers closed down, does not have easily solvable problems. The culture of drugs and guns replaced one of factory work and the lunch pail. Social programs have done only so much.

Through it all, Bobby holds out hope. He makes mistakes, has setbacks, but thanks to this masterful effort of reporting, his fundamental decency shines through. The reader is left wanting him to make it, hoping he will succeed. Bobby gets out of New Haven finally with some restitution, but still lives, just about every day with the imprint the city left on him.