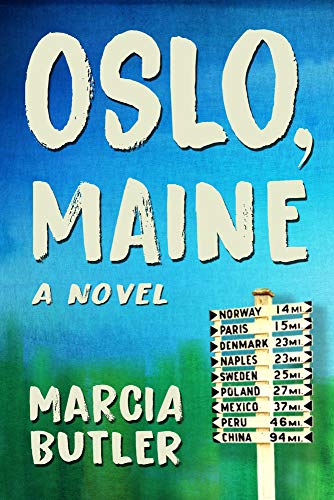 If you think “Maine” and imagine golden summer days eating lobster in trendy outdoor cafes and shopping at high-end tourist shops on the coast, you might want to consider a cruise brochure. Oslo, Maine is the other Maine, an inland world where a moose is as compelling a character as the human lives that cohabit her territory.

This is a world where two classically trained musicians live off the grid to make ends meet. One of them has an affair with a neighbor in the hundred or so adjoining acres, who’s addicted to pills and designer shoes. She’s married to a gruff, fourth-generation “Mainer” who’s running an illegal trapping business to afford those shoes for his petulant wife.

Another resident “from away” has considerable wealth, with considerable loss and heartbreak as well. She’s caring for her mentally challenged, adult grandson who compulsively watches episodes of Family Feud. In this fraught world a young boy loses his memory and sense of who he is in an accident and is brought back to life by the discovery of his love and prodigious talent for playing the violin. Oslo, Maine is told from the seamlessly alternating perspectives of these human residents, and the moose, whom we first meet in the Prologue searching for a place to birth her calf.

Butler, the author of a memoir and her debut novel, Pickle’s Progress, is a former professional oboist who performed for 15 years at a chamber music festival in central Maine. The novel’s passages about music feel authentic, without being overly technical. They are particularly engaging when told from the perspective of twelve-year-old Pierre as he zealously plays his violin to escape the hardships of a life without his memories, his anxiety caused by the tension between his parents and his mother’s pills addiction, and to find himself again: “He’d just started the fifth round of attempts, when a banging on the mudroom door broke his concentration. Pierre ignored the noise and now decided to pick apart the phrase. Slowing it down, he played one note, then the next and the next, focusing only on his bow arm. Then he brought in the left hand and tried for accuracy of pitch. Finally, he added the correct rhythms. Each thing on its own was really hard. But when all of it did come together, oh, how that made him happy.”

The Oslo adults in Pierre’s life drift around him, harboring their own secret challenges and often destructive ways of coping. His dad, blustery, macho Claude Roy (who bears more responsibility for his son’s injury than he wants to admit) can’t reconcile who his son has become since the accident, Pierre’s head either in a book or the violin, neither of which Claude values.

Then there’s his mom, Celine, whose grief and worry about her son is dulled with pain pills (and her affair with their neighbor, Jim). Jim Kimbrough, secretly haunted by the knowledge that his wife Sandra is a much better musician, first introduced Celine to the pills and hates himself for it.

Sandra (“the saint” as Claude derisively calls her), tired of being so poor they can’t afford hot water for a shower, recognizes Pierre is a prodigy, and finds meaning and purpose teaching him (and others) the violin. She is seemingly the one adult who uses her own gifts for good; even the moose trusts her, identifying her by her “violet” scent and long white “fur.” The wealthy woman from away, Edna, cares for Pierre and the others, then mistakenly (or ingeniously?) chooses Claude to mentor her simplistic grandson Luc.

Butler’s characters are such complex, authentically flawed humans, you can’t help but root for them. But then there’s the moose, who drifts in and out of their difficulties as quietly and unobtrusively as a moose inhabits the Maine woods. She too has a stake in all of this, and her life along with her calf’s, is caught up in their drama. Animating an animal on the pages of a mostly realist novel, such that the animal becomes a point of view, is tricky. It can fall flat, as in completely unbelievable on the one hand, or at the other extreme the author is accused of anthropomorphism. Butler’s moose is a moose, and we never lose that essential fact. It was a brilliant choice to open the novel in the moose’s perspective to immediately establish her stakes in the story. And while the human characters all have their own chapters, the moose moves in and out of their chapters as a creature not driven by human ego and desires, might. The moose does make a perhaps too-human decision at one point (without giving this away), which was maybe the only faltering in an otherwise deftly controlled novel.

Then again, who can know for certain the sentience of a moose? Butler establishes the fantastical element of inhabiting the moose’s consciousness from the start, and as in the best of magical realism, allows us to suspend our disbelief.

Oslo, Maine is an engaging, wonderfully nuanced novel, both richly human and moose, in all the right ways.

Jaimee Wriston Colbert is the award-winning author of six books of fiction. A new novel, How Not to Drown, is forthcoming in May, 2021. She is Professor of Creative Writing, SUNY Binghamton University.