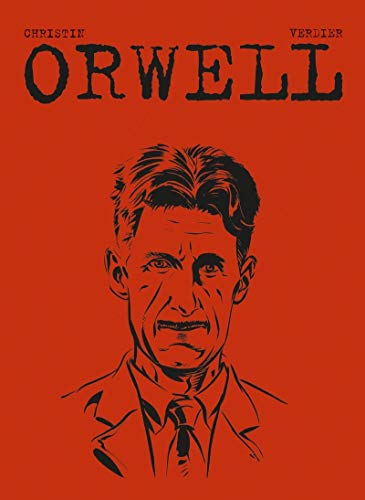 George Orwell was the pen name of Eric Blair, a boy who survived his years at snobbish boarding schools as a “reduced fee” student by burrowing into books. He earned a scholarship spot at Eton, which was equally miserable. These years created an ingrained distrust of aristocratic privilege and empathy for the poor and working classes.

Pierre Christin has done a masterful job of bringing Orwell’s complex personality and incredibly prescient thinking vividly to life. The book starts with his tortured childhood, moving quickly to his youth. As a young man a passion for social justice led him to serve in Burma, then fight in the Spanish Civil War, and ultimately to create his classic books that incisively satirized the evils of political manipulation and propaganda. Orwell’s name is now synonymous with using language to control reality, replacing truth with convincing fictions.

Using well-chosen quotes from Orwell’s own writing, Christin describes how the time in Burma sparked Orwell’s journey away from political oppression:

“I had already made up my mind that imperialism was an evil thing and the sooner I chucked my job and got out of it the better.”

Spending time with the working class, Orwell trained his critical eye on how the upper classes subverted the value of human work, replacing it with “breeding,” a worthless quality. The scale was backward, as far as Orwell was concerned:

“In a working-class home . . . you breathe a warm, decent, deeply human atmosphere which it is not so easy to find elsewhere. I should say that a manual worker . . . has a better chance of being happy than an ‘educated’ man.”

These notes took the shape of a book, The Road to Wigan, a form of reporting that would later be called “embedded journalism.” Orwell did with his words what Dorothea Lange did with her photos such as the famous “Migrant Mother,” giving a human face to poverty.

In the section on the Spanish Civil War, the masterful illustrator, Sebastien Verdier, does magnificent work, using wordless spreads to convey both plot and mood. The style verges on Goya’s Disasters of War etchings, bleak and horrific. The double-page spread where Orwell is shot in the neck is particularly powerful. And Christin has chosen exactly the right quote for the image.

After Franco defeated the Nationalist forces in Spain, installing himself as dictator for life, Orwell’s journalism increased in intensity and volume. He became suspicious of the left, the socialists who were supposedly building a better world for the working class:

“The Moscow show trials, devised by Stalin to eliminate the old Bolsheviks, finally convinced Orwell of the duplicity of the Soviet regime. He had never been a marxist, and felt only disdain for the ‘fellow-travellers’ of the European communist parties and the various Leninist factions. Far from being any organized ‘party’ of a proletarian vanguard, it was the grandeur of ordinary people, their ‘common decency,’ that continued to inspire him.”

These were the political beliefs that underlay his first classic, Animal Farm:

“What I saw in Spain, and what I have since of the inner workings of left-wing political parties, have given me a horror of politics.”

The last section of the graphic novel positions Orwell and “Orwellian” thinking in our current political and social currents. The man and his thinking are eerily relevant today, and this graphic biography is a brilliant introduction to Orwell and his own words.