The Origin of Feces: What Excrement Tells Us About Evolution, Ecology, and a Sustainable Society 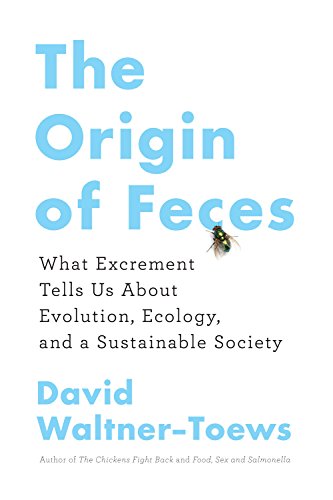 “a book worth reading.”

There's way too much of it in some places and not enough in others. It can spawn pandemics and help communities to thrive. It's essential to life, but nobody wants to think about it. We're talking shit here.

David Waltner-Toews has written a fascinating little book on the subject, full of small- and large-scale insights, esoteric yet riveting assessments of globalization, and wisecracks that are no doubt unavoidable given the subject matter. He opens with a rapt description of the life and mission of the dung beetle. (He's not the only dung beetle fan: also known as scarabs, they represented resurrection to the ancient Egyptians.)

From a ground-level encounter with an African beetle rolling its ball of dung he moves easily through scales from microbial to planetary to prove that we've got more excrement than we know what to do with, and one of the reasons for that is that we think of it as shit.

To the author, on the other hand, excrement is an indicator of health and interconnectedness, a tracer of where an animal (human or otherwise) has been, a valuable resource for energy production and ecosystem fertility, and basic to terra firma itself, or as he says, “. . . none of what we currently understand as the Earth would have been possible without shit.”

Although the book uses an entertaining style to detail what goes into shit, its role in ecosystem health or animal and human disease, even the imperialist grab for guano in the islands of South America, there are larger lessons here.

The author gives welcome attention to systems and complexity theories, to the difference between looking at a problem from an environmental and from an ecosystem approach, and to the model of “post-normal science” that is better equipped than standard, linear science to wrangle with complex problems.

Descriptions of the creepy means through which parasites gain tenure in their hosts trade with Big Picture discussions of holons and panarchy (the latter defined as “the multiple, multi-scalar growth, collapse, and change that we see around us”) as more resilient arrangements than democracy and the current industrial growth economic system. Refreshingly, he does not seek to “fix” that system, but back away from it, and recognizes the power of stories in reinforcing any system, saying that “. . . the mess we are in is largely the result of being held in thrall to a global techno-progress narrative.”

In an assessment he shares with many, Dr. Waltner-Toews declares that excrement has become a “wicked problem”—one with too many angles and unintended consequences to be “solved.”

Part of the problem is scale, he says: “We cannot address the issue of manure—indeed, we cannot act morally—without coming to terms with the speed, volume, and global reach of shit over-production from over-copulating fecund populations of people and the animals we have domesticated.” Rock on.

Looking at globalized food production and the migrations of developing countries' populations to overcrowded cities and slums, Dr. Waltner-Toews introduces an important but neglected problem. By shipping its monocropped grain overseas, for example, a producing country is sending away the water and protein embedded in it; because the transaction isn't local, that country will not recoup those resources as manure.

Meanwhile, the overpopulation of cities and the prevalence of confined animal feeding operations (CAFOs), or factory farms, cause too much excrement to be concentrated in areas that can't use it. This system, unlike more resilient, locally based, diversified farming, can't hold.

Impressively, Dr. Waltner-Toews examines his topic through many lenses: as a veterinarian, as an anthropologist, an epidemiologist, in yet others as an ecologist—and he does it all with a smooth writing style and much (sometimes a bit much) humor.

Throughout The Origin of Feces he calls for the complex disease and pollution issues caused by fecal overload to be addressed with localized means involving the people affected, instead of one-size-fits-all techno-fixes such as enormous sewage systems.

It's a book worth reading.