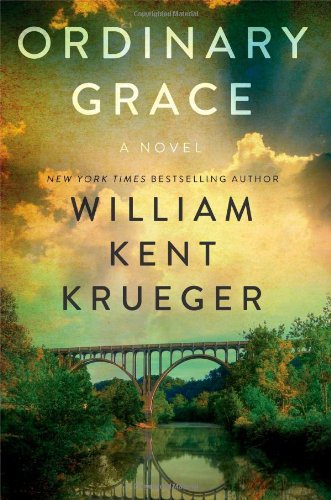 Mr. Kruger’s prose has been described by others as “pitch perfect”—a compliment hard to improve upon. He has an ear for just the right tone—whether in word, setting, sense, or emotion—that makes his novels ring true.

In his new book Ordinary Grace, he hits the mark with some observations about music itself. For example: “To this day there are pieces I cannot hear without imagining my sister’s fingers shaping the music every bit as magnificently as God shaped the wings of butterflies.”

And: “When my mother finally sang it was not just a hymn she offered, it was consummate comfort. She sang slowly and richly and delivered the heart of that great spiritual [‘Swing Low, Sweet Chariot’] as if she was delivering heaven itself and her face was beautiful and full of peace. I shut my eyes and her voice reached out to wipe away my tears and enfold my heart . . . And when she finished the sound of the breeze through the doorway was like the sigh of angels well pleased.”

Anyone who has heard music performed that well will know exactly whereof he speaks.

Meanwhile, anyone who is familiar with Mr. Kruger’s previous works will recognize that Ordinary Grace is not one of the Cork O’Connor crime novels. After a dozen of those, Mr. Kruger took a break to give us a standalone story, this one also set in Minnesota, but about a boy coming to manhood instead of a man hardened by brutal life.

Told through the voice of 13-year-old Frank Drum, minister’s son, in hindsight 40 years later, “It was a summer in which death, in visitation, assumed many forms. Accident. Nature. Suicide. Murder.”

One would expect, therefore, the book to be grim.

But thanks to Mr. Kruger’s gift with words, the story is uplifting despite the darkness of its subject. It’s subtle, to be sure . . . event after event is sad or disturbing, and young Frank’s struggle to make sense of it all is at times heartbreaking. But somehow, without sentimentality or melodrama, a positive spirit emerges from the novel and leaves a warm afterglow. It proves to be a testament to ordinary grace.

This title is finally stated deep in the story, where the bereaved mother snarls at her man-of-God husband over the dinner table: “[C]an’t you, just this once, offer an ordinary grace?”

By that time, the reader has already witnessed numerous acts of grace among characters strained by tragedy. The whiplashed remark about saying grace over a meal comes as a jolt—it seems so superficial after all the serious demonstrations of the real thing the story has shown. The contrast must be intentional, based on the author’s skill in building tension, drama, and redemption. The best example of ordinary grace occurs in a sermon given by the father after burying a loved one.

Frank is one of the few characters (his father among them) who can perceive gray areas between black and white extremes. His youthful self experiencing that awful summer is tempered by the adult looking back, able to recognize a soul who needs “to feed in isolation on the meat of his bitterness” and to see a storm as “silver bolts of lightning forged on the anvil of the great thunderhead.”

He recognizes the people of his father’s parish as “sensible farm families who in most aspects of their public lives were as emotionally demonstrative as a mound of hay.” And he looks closely enough at a friend’s father to note he has “eyes whose blue was so intense it was as if he’d purchased pieces of the sky for their making.”

Along with such details of character and setting, Mr. Kruger loads the pages with iconic bits from the early 1960s. Their familiarity to readers who lived through that era helps immerse them in the story’s universal truths.

Underneath it all is a straightforward crime-solving plot that advances quietly for 300 pages. It holds Frank’s viewpoint through a steady chronology—no head-hopping or time jumping in this story—allowing the reader to know the character so well he comes off the page like a real person. Through his keen perception, we get to know everyone else, too.

Altogether, Ordinary Grace forms a superb literary novel. It lingers in the mind long after closing the cover, and beckons one to read again for the sheer pleasure of the experience.