The Orchard of Lost Souls: A Novel 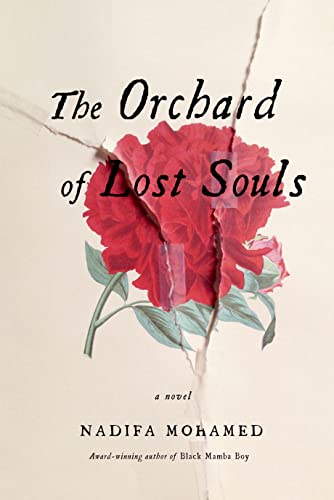 “. . . a haunting and intimate portrait of the lives of women in war-torn Somalia . . . captures the bleakness of war and the triumph of the human spirit . . .”

By Nadifa Mohamed’s own admission, The Orchard of Lost Souls, her second novel, was a difficult novel to write. It aspires to tell the story of a marginalized population (Somali women) from a marginalized nation (Somalia) torn apart by civil war and dictatorship, and does so almost entirely in the present tense. This marks a departure from the more traditional third-person narrative of Black Mamba Boy, Mohamed’s first novel and the winner of the 2010 Betty Trask Award.

Mohamed, named one of Granta’s top 20 young British novelists in 2013, weaves in The Orchard of Lost Souls a gripping, intense tale about a little-known world and a little-known history. The characters arise out of the dust of the Somali desert landscape and capture the reader’s heart and imagination in powerful ways.

It is 1987 in the town of Hargeisa in Somalia, about 18 years since the rise of President Mohammed Siad Barre’s regime. The dictator Oodweyne is in power, ruthlessly enforcing his power through Guddi units, bands of regime loyalists, while also suppressing the uprising of rebels in different parts of the country.

The confrontations between the regime and the rebels are bloody and unforgiving, and in this stark setting, Mohamed conjures up her tale of a young girl and two women whose paths cross by chance.

Against the backdrop of war and internecine conflict, Mohamed provides a haunting and intimate portrait of the lives of women in war-torn Somalia and focuses on how the civil conflict affects the everyday, domestic lives of these women.

In Mohamed’s own words, the novel is about “the small lives caught up within this bigger political event” and shows us “a different perspective of the war from each of their different viewpoints.”

The story is set in motion by an incident in which an orphaned nine-year-old child, Deqo, who is from the refugee camp of Saba’ad, is about to be beaten in a public square. An older woman, the widow Kawsar, intervenes to stop the violence, and she in turn is brutally beaten and dragged to jail by a female soldier, Corporal Adan Ali Filsan.

The novel’s three main sections, named after each of the central characters, proceed to flesh out their individual stories as they struggle to survive the ravages of the civil war— “totally ordinary yet irrevocably depraved”— and the violence of the present regime. Deqo finds temporary refuge among a gathering of prostitutes, where the compassionate Nasra befriends her. But this refuge is temporary, and Deqo must flee once again, this time after an attempted sexual assault.

While the impish and resilient Deqo struggles to fend for herself amid the violence and mayhem, the brooding Kawsar, released from jail and a semi-invalid in her home, struggles to heal from wounds both psychic and physical as she grieves over the violent death of her daughter, Hodan, some years earlier. This is possibly the most powerful section of the book, in which Mohamed exhibits her flair for storytelling and her capacity to evoke deeply felt emotions through lyrical language.

Kawsar’s story takes us back to a Somalia before the onset of the civil war and captures the close-knit community of women that Kawsar belonged to, a community that the war is now gradually eroding. Kawsar, in many ways the conscience of the novel, must choose between staying and fleeing to safety, and she chooses to stay, despite the dangers to her safety.

Finally, there is the story of Corporal Filsan, who is originally from Mogadishu and gives her heart and soul to the revolutionary regime that is trying to suppress the uprising in Hargeisa. A lone woman in a man’s world and an agent of graphic violence, Filsan soon learns that she has to listen to the dictates of her conscience as well, even as she dutifully, even slavishly, carries out her military responsibilities.

These three stories overlap in the novel, until the turn of events leads the paths of these three characters to cross again, as they collectively flee the violence of the rebel forces. By this time, there is little left to hold on to in Hargeisa.

Skillfully narrated by Mohamed, The Orchard of Lost Souls is rich in symbolism, emotion, and beauty. It is not for the faint of heart. Amid such horrors as children being abandoned to gunfire or having blood drained from their live bodies to be used for transfusions, it captures the bleakness of war and the triumph of the human spirit in Somalia. It is this human spirit that the author celebrates: the finding of “lost souls,” both metaphorical and literal, amid the carnage.