Orange World and Other Stories 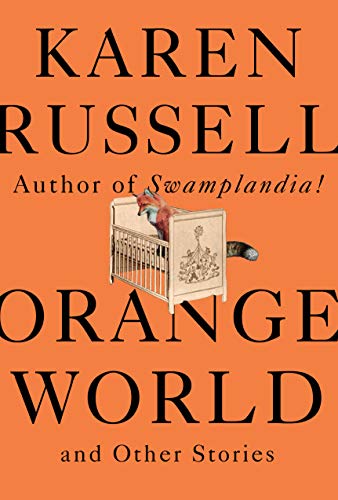 “Orange World and Other Stories exposes the difficulties of wanting. . . . Characters long for things that have no name. They live on the edge of terror. These are stories with deep resonance. They echo with compelling intelligence. They are wonderful.”

First, a word on Karen Russell’s not winning the 2012 Pulitzer Prize for fiction: while she was not exactly robbed, there remains a lurking injustice. The finalists list that David Foster Wallace’s The Pale King and Russell’s Swamplandia!, but no winner was ultimately chosen, in what remains one of the oddest decisions in modern American literary acclaim. Wallace was the obvious selection, in that his novel was both posthumous and massive. But he was not the winner. No one was.

While most took the Pulitzer board’s decision as a slight against the novels in contention, it might be more useful to see that year’s competition as a moment when “best book” finally became such a reductive label as to be truly absurd.

Now, seven years later, only one finalist is left living. (The third finalist was Denis Johnson’s Train Dreams. Johnson passed away in 2017.) Karen Russell has not published another novel, but she has established herself as one of the country’s pre-eminent writers of short fiction.

Orange World and Other Stories is as good as anything Russell has written, and perhaps better. The stories are surreal, magical, and often eerie. While Russell makes free use of fantastical elements, her stories are most notable for her dense, enchanting prose style. Her abilities with language integrate her magical and realist elements seamlessly, producing impossible, plausible worlds on the page.

“The Prospectors” is a fairly conventional ghost story that redeems itself with layers of emotional complexity. Two young women seeking rich men at a fancy party arrive at the wrong chalet and spend the night with dead men. Wealthy runaway Clara is, in true Russell tradition, the daughter of Floridian hoteliers. Narrator Aubergine is fleeing more humble origins. She offers Clara sanctuary (from what, not even she knows), but is increasingly aware that there are perils beyond physical violence that they may not understand well enough to navigate.

In “The Bad Graft,” lovers on the run (fleeing westward, as so many characters do in this book) come to Joshua Tree National Park. The woman becomes infected by the spirit of a Joshua Tree. It’s an ancient, mad thing, tied to the desert, and it transforms her. Her lover is increasingly aware that “the girl he loves has exited the building,” but fails to understand why.

Perhaps the collection’s best story is “Bog Girl: A Romance.” Fifteen-year-old Cillian takes a job as a turf-cutter on a nameless island in the Atlantic and unearths a millennia-old human sacrifice. He falls in love with this girl, murdered two thousand years ago, and decides to bring her home. There, dead and beautiful, she becomes his girlfriend, with all the attendant baggage of a teenage romance.

The corpse goes to school, where she expands her obsessive power beyond Cillian to an entire adolescent community: “Rumorsprawl. Word got around that the Bog Girl was actually a princess. A princess, or possibly a witch. Within a week, she was eating at the popular girls’ table. They’d kidnapped her from where Cillian had positioned her on a bench, propped between two book bags, and taken her to lunch. Already they had restyled her hair with rhinestone barrettes.

“’You stole my girlfriend,’ Cillian said.

“’Something awful happened to her,’ Vicky said reverently.

“’She doesn’t like to talk about it,’ Priscilla said, looping a protective arm around the Bog Girl. The girls had matching lunches: lettuce salads, diet candy bars, diet shakes. They were all jealous of how little she ate.”

Cillian’s single mother is jealous, too, and frustrated by the intrusion of a (silent, dead) teenaged girl into her household. The story’s absurdity reinforces the fraught relationships. All such conflicts are, in some way, absurd. Adolescent romances seem shallow and pointless, viewed from outside, their intense emotions unreasonable and easily mocked, yet from within, these are matters of life and death.

In each of her stories, Russell conveys the intensity of desire. She examines its awkwardness and humiliations. Orange World and Other Stories exposes the difficulties of wanting. Love and career aspirations both offer the potential for profound humiliation. Characters long for things that have no name. They live on the edge of terror. These are stories with deep resonance. They echo with compelling intelligence. They are wonderful.