The Oracle (A Sam and Remi Fargo Adventure) 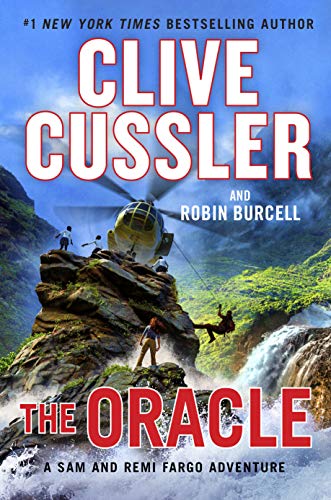 “The Oracle is good entertainment, and the attention it pays to the need for proper schools for girls in Nigeria is important.”

Five hundred years after the birth of Christ, the last Vandal ruler in North Africa consults an oracle on how to defeat the invading Byzantine army. The oracle reveals that a curse was placed on the Vandals after a sacred scroll was stolen.

To lift the curse and prevail against the Byzantines, the scroll must be returned. But the Vandals are defeated before the scroll is found, and the search now falls to modern-day husband-and-wife treasure hunters Sam and Remi Fargo, who are currently funding an archaeological dig in Tunisia to locate the ancient artifact.

The dig is interrupted, however, when a shipment of supplies for their charitable school for girls in Nigeria is hijacked. Sam and Remi leave Tunisia and quickly find themselves in dangerous territory as they battle robbers and kidnappers who threaten the safety of the schoolgirls and everyone else involved in the project.

The Oracle is the 11th adventure thriller in the Fargo series published under the Clive Cussler name. For co-author Robin Burcell, it’s her fourth collaboration in the series.

Cussler’s co-authors are expected to write stories that adhere to the conventions and frameworks of their respective series, so that readers know what to expect each time out. It’s a formula that usually produces very entertaining thrillers.

The novels generally open with an ancient mystery, teasing the reader with a fantastic treasure hidden out there somewhere waiting to be found, and follow up with Sam and Remi gearing up their organization to get out there and discover it.

Spartan Gold, for example, the first in the Fargo series, begins with Napoleon Bonaparte stumbling across an incredible ancient Persian treasure while traversing the Alps. The thriller is then constructed around a series of wine bottles curated by Napoleon to provide clues to the location of the hoard. As Sam and Remi find each bottle, they inch closer to the discovery of a lifetime.

The Oracle, however, abandons this highly effective quest motif as an underlying structure. While it teases us up front with the priceless Vandal scroll, the vast majority of the novel focuses on their battle with lawless renegades threatening their charity school in Nigeria, and as a result the book is more an episodic mystery than a thriller as the Fargos skirmish with the bad guys and try to figure out if they have a rotten apple within their team.

It’s a good story, overall. Sam and Remi are likeable as co-protagonists. They get along well, their skills complement each other in the treasure-hunting and bad-guy-whacking adventures that give their lives meaning, and readers can trust them to deliver the goods in the end.

Additionally, Burcell does a good job keeping things moving along without digressions into lengthy analyses of the political and social situation in Nigeria. Boka Haram lurks in the wings, and the constant threat of kidnapping for ransom, such a serious problem in the real world, helps the novel maintain a good level of suspense without interfering with the constantly moving machinery of the plot.

The only problem is that the Vandal stuff in Tunisia, the scroll and the curse, is superseded in the middle 80% of the book by the constant battles fought by the Fargos with the bands of bad guys in Nigeria who threaten their school. At some point we stop thinking about the treasure and focus instead on the safety of the girls and the identity of the turncoat within the team. The quest peters off into the distant background.

The Oracle is good entertainment, and the attention it pays to the need for proper schools for girls in Nigeria is important. As a quest for treasure, however, it falls short. Grafting two completely separate storylines together into one novel seldom makes for a successful thriller, and this particular installation of the Fargo series unfortunately falls victim to that pitfall.