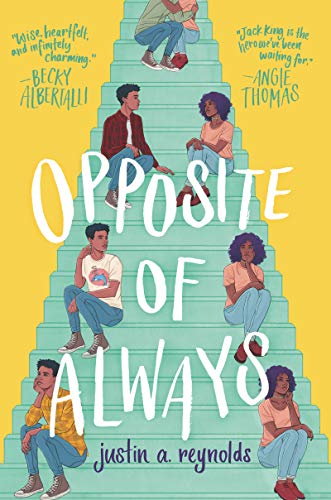 A delightful, compelling, and heartfelt debut YA novel, Opposite of Always will thrill fans of John Green, Nicola Yoon, and David Levithan.

High school senior Jack King seems to have it all: loving parents, loyal friends, sardonic wit, and acceptance to the college of his choice. That is, until he meets the girl of his dreams, Kate.

Suddenly, Jack's perfect life unravels. As he devotes more time and energy to wooing Kate, he neglects his obligations, breaks his parents' rules, and even, unwittingly, betrays his best friend. At least he has Kate . . . until, suddenly he doesn't. First, Kate abandons him on the night of the prom, then inexplicably breaks up with Jack.

Kate has her reasons: She has a terrible disease, a burden she refuses to saddle Jack with. Jack learns her secret on the day Kate dies—and in his shock and grief, he falls down a set of stairs and dies as well.

Only to wake up six months earlier, back at the moment when he meets Kate. Jack retains his memories of those whirlwind, wonderful, once in a lifetime first six months, but to Kate he's a complete stranger. Determined to save Kate—and his relationships with his friends and parents—Jack plunges into a Groundhog Day existence, reliving the same six months over and over and over.

Can he ever find his way back to a life where he has it all, including Kate? As Jack says after several frustratingly heartbreaking incarnations, loving someone is like the sun suddenly revolving around the earth:

"You're moving along life, doing your thing, managing your priorities and commitments—

And then you meet THE ONE.

And you fall completely out of the orbit you've been spinning in.

And now you're doing laps around this new world.

And you're hoping gravity can sustain.

But there's no way of knowing if it can until you realize it can't.

Guess it's all an orbit of faith."

Our faith in Jack and his own faith in his friends and family are rewarded in both expected and surprising ways, but what really makes Opposite of Always compelling is Reynolds' witty voice. Enchanting might be a better term (after all, this story is at its heart a fairytale), as Reynolds combines urban grit, suburban optimism, and just the right amount of snark to create an unforgettable love story.