Operation Underworld: How the Mafia and U.S. Government Teamed Up to Win World War II 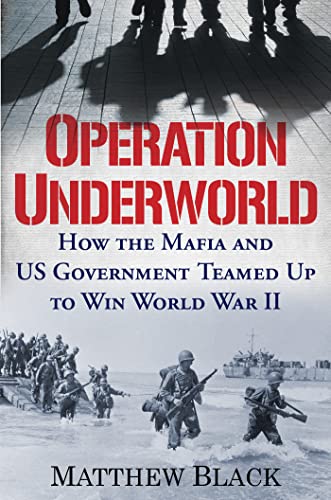 “the author tells this story in a clear and engaging manner that makes the text read almost like a crime novel told on a personable, almost heartbeat level.”

On February 9, 1942, not two months after the United States officially entered World War II, the Normandie, the world’s fastest and second-largest ship, burned and sank before it could be converted into a troop transport. The FBI had just brought down a major nationwide German spy ring but, as author Matthew Black wrote, “the United States military and law enforcement weren’t even close to being aware of all of the enemy spy rings that had been operational for some time.”

The hugely powerful economic engine, the port of New York, was vulnerable to traitorous mercenary Americans (including organized crime) and foreign agents. German submarines had also sunk 40 ships off its shores before the Normandie sank.

In Operation Underworld, Matthew Black tells the story of how the United States government partnered with an Italian Mafia crime organization to prevent enemy espionage and sabotage, beginning with recruiting Joseph “Socks” Lanza. This mid-level crime boss over the Fulton Fish Market agreed to help as a patriot, not for reward.

The United States Navy continued to fail to save ships from the enemy U-boats, but Lanza put the enormous civilian coastal fishing fleet, almost all crews Italian, on the look for these submarines and the Long Island truckers searching for enemy landings. He brought in Benjamin Espy, “thief, hustler, and smuggler,” but now mob enforcer on the fishing boats and union connected.

Lanza provided the Navy with a list of men in almost any American ports who could be called upon for anything at any time. Mob members and contacts created an extensive network of informants across New York that included spying on anti-war groups. Lanza had worse than no influence with the Irish, immigrant Italian, and the four other mafia crime families of New York, however.

No one seemed to feel that working with gangsters, even if patriots asking for nothing in return, was a good idea except for controversial Navy Lieutenant Commander Charles Radcliffe Haffenden, the officer running Operation Underworld. His tactics began to resemble those of the mob, however, and he unintentionally empowered underworld control of the docks.

Through Lanza and Gurfein, Haffenden had to find a way to bring in the infamous Charles “Lucky” Luciano, and through him, the other crime bosses, into Operation Underworld. He then had to use the mob to help with information useful for the coming allied invasion of Italy. Haffenden succeeded in all of this and, through those efforts, the Sicilian mafia and even the island’s fishing fleet helped America.

The United States Navy has covered many embarrassing secrets that have only come to light in print in recent decades. Records were destroyed and witnessed silenced concerning Operation Underworld. Haffenden was severely punished, despite his distinguished service, for admitting to Governor Thomas Dewey that Luciano helped the war effort.

The mafia boss of bosses did obtain release from prison, but he was immediately deported and never allowed to return to the United States while alive. Ironically, the mob also had its Operation Undercover secrets that it wanted to be kept until long after Luciano’s death.

Curiously, the author did not include why the Normandie caught on fire. Rumors continue that the mob sabotaged the ship. In fact, a welding accident during its conversion ignited life preservers. The ship’s fire suppression system had been shut off.

This book is a guided historical tour through New York in the 1940s, the characters of this story, and also the iconic buildings where the events took place. Most of the characters are unfamiliar because they were real but never became legends like Anastasia, Genovese, Lansky, Luciano, Meyer, and Siegel. It provides a very basic history of the New York underworld of the time.

The prose in Operation Underworld is sometimes crude but the author tells this story in a clear and engaging manner that makes the text read almost as a crime novel told on a personable, almost heartbeat level. A reader should not have a problem keeping up but, rather, with being able to put the book down!

Operation Underworld demonstrates how to make a complicated unfamiliar topic a fascinating fast read. It has illustrations, a section on the fate of the many second-tier characters, an epilogue, notes, and a bibliography.