Operation Pedestal: The Fleet That Battled to Malta, 1942 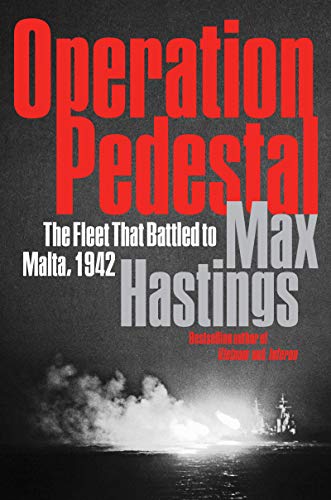 “Hastings is especially good in Operation Pedestal at describing the excitement, fear, and weariness of the British seamen and airmen as they encountered Axis attacks.”

Winston Churchill called Operation Pedestal—a mostly British naval and Merchant Marine mission (with American assistance) to supply the beleaguered military garrison and population of Malta—“the supreme struggle for the life of Malta.” And as British military historian Max Hastings points out in his new book Operation Pedestal, Malta’s importance to the Allied war effort was as much psychological as strategic.

In 1942, the war was not going well for the Allies. The Americans had suffered defeat in the Philippines, and British forces had surrendered at Singapore and Tobruk. “Malta’s loss to the Axis, coming after so many other humiliations,” writes Hastings, “would be a crushing blow to national spirit” and “a calamity for the prestige and self-respect of the British Empire.”

British strategy early in the Second World War focused on the Atlantic Ocean, which was its lifeline to the American “arsenal of democracy,” and the Mediterranean Sea, the central passageway to its imperial possessions in North Africa, the Middle East, and the Indian subcontinent.

The bed of the Mediterranean Sea, Hastings notes, “is strewn with more wrecks of war . . . than any comparable space on the planet.” The famous battles of Actium, Salamis, Lepanto, and the Nile were fought in these waters. Malta lies near the center of the sea, between Sicily and the coast of North Africa. By the summer of 1942, it was “the only surviving British bastion in the central Mediterranean.”

Germany’s regional commander General Albert Kesselring wanted to seize Malta, and in early 1942, he launched air attacks on the island by 250 bombers and 160 fighters based in Sicily. The German attacks resulted in more than a thousand killed, more than 4,000 injured, and the destruction of more than 15,000 homes. German and Italian naval forces sought to blockade the island with mines and submarines.

Hastings describes the plight of the Maltese as “pitiable, beneath this sustained onslaught.” The intense and destructive bombing and starvation caused by the blockade, he writes, “threatened to break the spirit and resistance of Malta, its garrison and people alike.”

Churchill’s answer to Malta’s plight was to use British sea power to send needed supplies—fuel, food, medicine, weapons—to the island. Vice Admiral Neville Syfret was chosen to command the operation. Hastings describes him as “an efficient, experienced, rock-steady commander . . . well-suited to guiding his force through the ordeal by fire that it must face.”

The British force entered the Mediterranean through the Straits of Gibraltar on August 9, 1942, after the men were allowed to gather for worship and sing “God Save the King.” Hastings quotes one commander who recalled gazing into the evening’s blackness and thinking about the “desperate venture” that lay ahead and praying to “the Ruler of Destiny for his favour.”

Hastings notes that the Axis powers had intercepted coded messages and knew that elements of the British fleet were on their way to supply Malta. For the next five days, Hastings writes, the opposing forces would fight “one of the bloodiest air-sea battles of the war in the West.”

The German and Italian forces had the advantage of nearby land-based air forces—totaling 456 warplanes—on Sicily, Sardinia, Pantelleria, and North Africa. The Axis powers also utilized submarines to attack the British convoy.

Axis attacks by air and sea occurred every day from August 11th to August 15th. Hastings is especially good in Operation Pedestal at describing the excitement, fear, and weariness of the British seamen and airmen as they encountered Axis attacks. Men in engine rooms drowned as the sea poured into damaged ships. Crewmen jumped into blazing seas, often suffering severe burns and death, as their comrades listened to their cries of agony. It was, he writes, a “week of slaughter.” There is nothing glorious about war, but Hastings clearly and rightly admires the courage and perseverance of the fighting men.

In the end, four merchant ships and the tanker Ohio successfully docked at Malta’s Grand Harbour, providing needed food, supplies, and fuel to the island’s garrison and people. However, the British suffered the loss of nine merchant ships, an aircraft carrier, two cruisers, a destroyer, and 457 men. It was a tactical victory for the Axis, but a strategic win for the Allies. Malta escaped the Nazi grip due to the courage and fortitude of British seamen and airmen.

Hastings notes that some historians doubt the significance of Operation Pedestal. Correlli Barnett, for example, called Malta “a strategic burden and moral obligation glorified into a heroic myth.” Winston Churchill gets the last word: [T]he heroic defense of that island in [1942] formed the keystone of the prolonged struggle for the maintenance of [Britain’s] position in Egypt and the Middle East.”