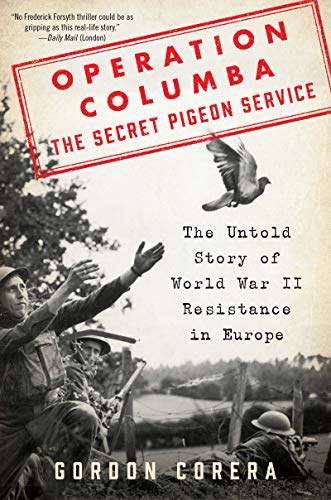 “For students of history, and also for casual readers who simply enjoy learning new and unusual aspects of history, this book is a real gem. You’ll probably never look at pigeons the same way again.”

So pigeons were among the unsung heroes of World War II. Go figure!

In Operation Columba: The Secret Pigeon Service, author Gordon Corera dips into the secret files of Britain’s MI14 for this fascinating account of pigeons, peasants, and patriots and how they aided the Allied war effort both from within and without Nazi-occupied territory in World War II. Where radios failed, pigeons prevailed.

Thinking outside the box, intelligence personnel in Britain realized that, with the inherent difficulties and dangers of relying on human agents dropped behind enemy lines, couriers, and radio transmissions to retrieve critical information about the enemy, there was an alternative: Columba livia—rock dove, or, more commonly, pigeons. The British called upon the pigeons’ “superpower,” which Corera described this way: “The pigeon is not on a mission to save the world. It just wants to go home.”

The operation, on its face, was deceptively simple: British planes dropped 16,000 homing pigeons over occupied Europe during the course of the war, parachuted in small baskets with rice paper, containing a list of questions to be answered by civilians who found them, tucked into canisters tied to their legs. Although many pigeons died in the process, sometimes “captured” by the Nazis, sometimes ending up as entrees on the dinner plates of starving peasants, and sometimes left ignored, others returned to their lofts across the English Channel carrying critical intelligence.

But while the use of homing pigeons is more than an interesting diversion, this is ultimately a story of human heroes, trapped inside Nazi-occupied Europe, who risked their lives for the cause of freedom. As Corera points out, “Pigeons did not win the war. People did.”

Notable were the heroes of a Belgian resistance group known as Leopold Vindictive, named in honor of King Leopold of Belgium and an aging cruiser, the Vindictive, that the British sank during World War I to block a port.  Under the leadership of a charismatic priest, Father Joseph Raskin, Leopold Vindictive was responsible for what is simply known as “Message 37,” perhaps the most complete and astonishing piece of intelligence to be flown out by any of Operation Columba’s pigeons: two pages of folded paper on which Raskin, writing with the aid of a magnifying glass, included information on German troop movements, maps and drawings (Raskin was also an artist), damage assessments of recent British raids, and Nazi gun placements.

Message 37 arrived in Britain in July of 1941 and inspired confidence in the potential of the Special Continental Pigeon Service, which operated until it was formally closed in February of 1945. In the interim, it produced valuable intelligence for the war effort, but also sparked counter-intelligence from the Germans, who formed their own pigeon service. Sadly, Father Raskin paid the ultimate price for his espionage activities, which went far beyond sending Message 37, and he was beheaded on the guillotine in 1943.

Corera also describes pigeon politics—petty rivalries among British spy services, which would be amusing if the consequences had not been so deadly. There were also conflicts between pigeon fanciers and falconers, since hawks were almost as deadly to the pigeons as anything else, a fact the enemy recognized. “The Germans were the first to weaponize the hawk,” Corera writes.

A particularly interesting tidbit has to do with the use by the Americans of pigeons. On one occasion, a single pigeon carried four messages during the battle of El Guetter in North Africa, including two from General Patton.

In another instance, a pigeon named G.I. Joe arrived timely with valuable intelligence that was credited with saving the lives of hundreds of soldiers and civilians in an Italian village. Corera tells us that “G.I. Joe would be the first non-British bird to be awarded the Dickin Medal for gallantry by animals, an honor he enjoyed until 1961, when he died at the ripe old pigeon age of eighteen.”

Corera summed up the operation this way: “Columba was a unique intelligence operation that provided something that no other source could: intelligence from ordinary people in enemy territory, almost in real time.” For students of history, and also for casual readers who simply enjoy learning new and unusual aspects of history, this book is a real gem. You’ll probably never look at pigeons the same way again. You might even be willing to forgive them for occasionally soiling your clothes on a city street.