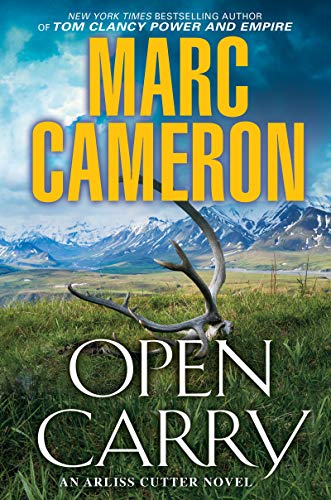 “Marc Cameron is a crackerjack writer who knows how to evoke character, place, and action.”

The story jumps directly into action in Alaska—foreign turf for a guy from Florida. But Cutter has done his time in plenty of strange worlds, including military service in the Middle East, and he knows that chasing down bad guys is pretty much the same everywhere except for the particulars of the environment.

Here his turf is Prince of Wales Island in the Alaska panhandle. Its tangled coast is home to Native Americans and downcountry transplants and TV crews and cops and gangsters, among whom Cutter tries to find three missing people.

The first is a Native Tlingit girl. Her body soon turns up, obviously murdered—which bodes ill for the missing two members of a film crew on an Alaska-based show. Turns out there is more than one party of killers at play. Their trails cross enough to confuse the most expert trackers, of which Cutter is one.

He’s also one of those people who “seem to go for birds with broken wings”—a common character trait for tough guys in fiction. Cutter is indeed a tough guy, one who rarely smiles and possesses many deadly skills and survival smarts.

He also enjoys ridding the streets of petty crooks as well as master evildoers, sometimes with an needlessly heavy hand. When someone asks, “You were born with a temper?” he answers, “No, but I earned it, fair and square.”

Despite the traits he might share with other action heroes, Cutter comes across as a unique individual. So does everyone in the book. Each has tons of personality without becoming a caricature. Marc Cameron is a crackerjack writer who knows how to evoke character, place, and action.

The plot never wavers. Dialogue and relationships never get overdrawn. At intervals nifty descriptions appear, such as when a team of cops is gearing up for action in the “full battle rattle of law enforcement on a mission.”

All fiction, of course, is about personal taste, as to whether you like a novel and refer it to your friends. In Open Carry, this reviewer’s dislike of head hopping got in the way of fully loving the book. “Head hopping” means changing character viewpoint instead of sticking with one point of view throughout a narrative. It’s a common technique used to flesh out a scenario and give readers information the main character(s) can’t know.

Open Carry changes POV between Cutter, victims, perpetrators, and others. Fortunately, these changes occur at chapter breaks instead of mid-chapter, so they never get confusing. They are only frustrating if you really like the lead character and want to stay in his or her head.

That aside, the author handles POV shifts as well as he does all other aspects of writing. The diverse viewpoints add dimension as well as suspense, resulting in a solid crime novel involving wilderness adventure.

This should come as no surprise, as he’s been selected to write Jack Ryan novels as part of the continuing work of the late Tom Clancy. Only the best thriller writers earn that opportunity.

This reviewer agrees that he ranks among the best. Despite her personal bias against head hopping, she thinks Marc Cameron’s new book is terrific and recommends it to everyone who likes the genre—and maybe even those who don’t.