Only Killers and Thieves: A Novel 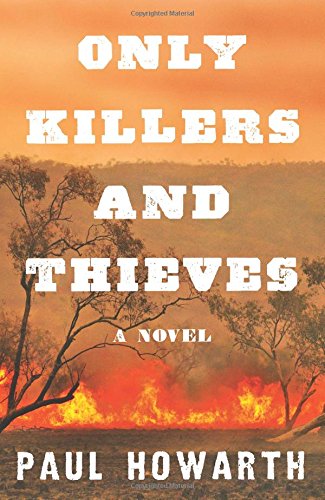 “Only Killers and Thieves is a powerful debut.”

Perhaps, no other country comes as close to mirroring the American Wild West as early Australia, and in particular, the country’s vast, untamed outback of survival and endurance during the late 19th century. Paul Howarth’s debut novel, Only Killers and Thieves, reinforces and helps authenticate that perception.

The year is 1885 in the parched plains of Queensland, and a devastating drought is bringing death and horror to the land and livestock, threatening to destroy the lives of the McBride family and others.

Two young brothers, Billy and Tommy McBride “not quite men, tiny in a landscape withered by drought and drenched in unbroken sun” are about to stumble onto a terrible event that will change their young lives forever.

The boys have been out hunting for food for their family, but in their eagerness to please their loving but at time overbearing mother, they have committed a cardinal sin of crossing the boundary line of their neighbor, local hard man and rancher John Sullivan, and his vast estate, one hundred times the size of the McBride’s land.

“They’d been walking less than a mile when Tommy saw the first horse coming over the rise. He threw out a hand and grabbed Billy by the shirt, and pulled them both down to their knees, his eyes on the horse all along. It was heading east to west, only five hundred yards away, and was ridden by a very tall man, sitting fully erect in the saddle, wearing a slouch hat and longcoat flapping open at the sides.”

Eventually, more riders emerge in the near distance, sinister, like a scene from the Book of Revelation. Sullivan is leading them alongside Inspector Edmund Noone, head of the region’s Native Police, an infamous arm of British colonial power charged with the “dispersal” of indigenous Australians to “protect” white settler rights. Behind one of the riders, three aborigines are chained to the neck on a force march of death.

However, instead of four horsemen from the Apocalypse seven is the number for this racist brutality and torture, as one of the aborigines is murdered in cold blood, for "entertainment."

The boys return home, but say nothing of what they have just witnessed in case it brings their family into needless conflict with Sullivan and his murderous marauders.

As time goes by, their father and his hired help go out to the land to see how badly the livestock has fared in this hellish weather. It is then that the fate of the other two aborigines is discovered:

“From its branches, ropes creaking, two bodies hung. Both had been mutilated, both had been burnt. Two knotty, dark medallions, dangling. carrion birds hunched in the branches above their heads and flies crawled over their charred skin. gently they swung in the wind.”

The bodies are eventually taken down for burial by the aborigine stockman working for McBride. The same aborigine with hate in his eyes for what the white settlers have done to his people and his land. Despite being hired by McBride, the anger in the man’s eyes let’s McBride know that he regards him as nothing more than another white oppressor.

This slaughter soon becomes the catalyst for murder and revenge.

In later days, just as hope threatens to fade into the land’s dusty cavities, a miracle happens: rain in all its glorious wetness and life-giving power descends on the land bring growth and wonder. When the rain finally comes, it is a miracle that renews their hope for survival. But returning home from an afternoon swimming at a remote waterhole filled by the downpour, Tommy and Billy meet with a shocking tragedy.

Thirsting for vengeance against the man they believe has wronged them, the distraught brothers turn to Sullivan who quickly gathers a posse led by Noone and his Queensland Native Police. As they ride across the barren outback in pursuit, their harsh and horrifying journey will have a devastating impact on Tommy, tormenting him for the rest of his life.

Only Killers and Thieves is a powerful debut. Paul Howarth brings early Australia to life, bloody warts and all, in an epic tale of murder, revenge, and colonial oppression, with very little room for redemption. The story and his words will stay with you, long after you have finished the book.