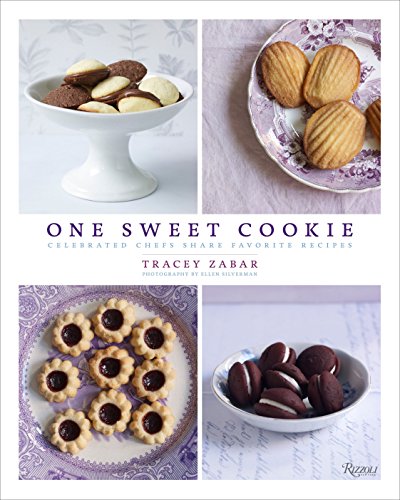 “With the idea of writing a book for the ultimate cookie swap—one with perfect, cheflike confections—Tracey Zabar began hitting up mostly New York chefs and bakers for their best recipes. Too many chef recipes could easily spell disaster—so many chefs, so many terrible cookbooks—but One Sweet Cookie, a calm, graceful book, provides a number of tempting recipes that serve up what they promise.”

Please excuse the crumbs: It’s hard to type a cookbook review while contentedly munching a result of a recipe test for that book. With One Sweet Cookie, the recipes may not be amazing or terribly original, but they certainly are tasty.

With the idea of writing a book for the ultimate cookie swap—one with perfect, cheflike confections—Tracey Zabar began hitting up mostly New York chefs and bakers for their best recipes. Too many chef recipes could easily spell disaster—so many chefs, so many terrible cookbooks—but One Sweet Cookie, a calm, graceful book, provides a number of tempting recipes that serve up what they promise.

A brief introduction leads straight into a brownies and bars chapter, and the second recipe, Maida Heatter’s Palm Beach Brownies, filled with a layer of peppermint patties, runs in classic Heatter style over three pages. The bottom third of the third page however, is Ms. Zabar’s “Bali Hai” variation with ginger, coconut, and macadamia nuts replacing the mints and walnuts of the original. It’s a variation worthy of the original, deeply moist (though watch carefully to keep from overbaking the edges), rich, and, as the author says, extravagant—and worth it. Do use the optional crystallized ginger in these, which provides a necessary counterbalancing zing.

This recipe, with all its detail, precedes a cheesecake brownie that just fills a page. Although not lacking in any basic information, the contrast remains striking. The cheesecake recipe better shows what will come in the rest of the book; namely, recipes with reasonable amounts of instruction, though sometimes falling a bit short of all the explanation a novice might appreciate.

For example, a recipe for pizzettes, in the chapter on biscotti, spice cookies, and seed cookies, could have used more detail in the headnote or the instructions. A test of the recipe suggests that these are to look like traditional biscotti, though they are baked just once and thus stay fairly soft. The instructions say only to roll out a “small portion” of the sticky dough to “form a rope the thickness of a sausage,” to be flattened slightly and cut into inch-wide pieces. “What sort of sausage?” will be the baker’s first question, while wrestling with the sticky dough and wondering exactly what these cookies should look like. In the end, it didn’t seem to matter; whether cut into small, thick squares, or longer, angled fingers, and spread with chocolate frosting, the pizzettes, flavored with cinnamon, cloves, chocolate, cocoa, and almonds, come out as tender, slightly cakey cookies with a bit of crunch, just right alongside a cup of strong coffee.

Another recipe, “chocolate knobs,” didn’t quite live up to its billing as cookies that are more like old-fashioned chocolate candy; they came out neither very candylike nor all that different from standard chocolate cookies, but still solid chocolate cookies—a good thing, as the recipe makes 5 dozen.

The extravagance level of the recipes also, happily, varies widely; not all the cookies are as rich as the Bali Hai brownies.

Only one recipe test was a thorough failure. Trendy macarons, filled here with raspberry jam, use a slightly different technique than many recipes, whisking confectioners’ sugar and almond flour with an egg white and apricot jam before a whipped egg white is folded in. That may not have caused the problem, but these failed in an initial test to puff upon baking, which is done at a higher temperature than many macarons. For all the simplicity of their ingredients—mainly just egg whites, almond flour, and sugar—notoriously fussy macarons can give bakers a fit. Given that, some troubleshooting tips would have been nice with this recipe.

Look past some of the recipe titles to see the tweaks and twists that make some of the common ones more interesting. For example, multiple versions of gingerbread and molasses cookies include some with crystallized ginger and cardamom, or ground ginger, cardamom, and candied citrus peel, or with a technique that involves spreading the dough in a sheet pan, chilling it, cutting it into bars, freezing them, then sugar-dipping and baking the bars.

Candied orange peel turns up in several recipes, as do some other non-standard pantry ingredients, such as melon confit cubes, a packet of Dr. Oetker vanilla sugar (with no suggestion for a substitute), and red fife flour. But for all but the most novice baker, most of these recipes call for what kitchens would already stock.

Attractive photos convey the simplicity of many of the recipes, and some of the prettiest will tempt bakers to buy new equipment, such as the “jammy dodgers,” which require a 3-inch square cookie cutter; these sandwich cookies, square with an off-center small circle cut out of the top, show how easily simple cookies can go fancy. Likewise, photos of poppy seed linzer cookies filled with lemon curd could easily propel a baker into the kitchen.

No photo accompanies the recipe that left the crumbs all over this review, and it’s probably just as well. The small “Sandys,” though bursting with chocolate chips, were nothing exciting to look at. This is one of the recipes that calls for candied orange peel; bakers will appreciate that it’s listed as an optional ingredient, given that it can be hard to find and a bit time-consuming to make, but it would surely be a worthwhile addition. Even without the peel, though, the combination of butter, chocolate, and cinnamon in a bite-size cookie makes a quick treat well worth the minimal effort.