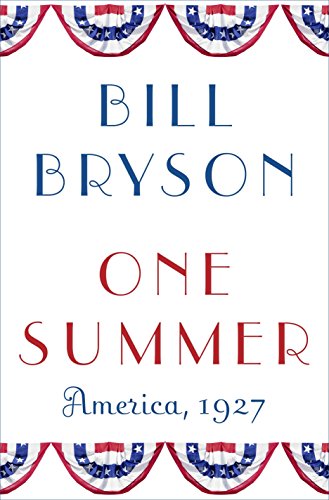 “. . . a mosaic illustrating a pivotal year in America’s global economic and cultural success.”

Bill Bryson’s latest book One Summer: America, 1927 is a fascinating examination of American heroism, invention, and resilience in the face of moral decay of the roaring ’20s.

It is a series of unrelated anecdotal accounts of significant events during the summer of 1927 that include Lindberg’s crossing the Atlantic, Al Capone’s rising power, Babe Ruth’s 60 home runs, and the filming of the first “talking picture.” Together they form a mosaic illustrating a pivotal year in America’s global economic and cultural success.

There is something comforting in the knowledge that Bill Bryson has a new book out, and One Summer does not disappoint. Intimidatingly large, this tome is more an anthology, each section virtually complete in and of itself, but the whole is joined thematically so that One Summer forms a cohesive narrative, leaving the reader satisfied, entertained, and contemplative.

Of those events explored in this book, Mr. Bryson singles out Lindberg’s achievement as the most important. America was the birthplace of aviation, the first nation in the air, and yet until 1927 our industry still looked toward Europe for continuing innovation in flight.

If necessity is the mother of invention, then the first World War explains why Europe took the lead: They were the first to weaponize planes and invented the dog fight, ultimately romanticizing a devastatingly brutal form of combat.

By 1927 America was the economic leader of the world, and ordinary Americans enjoyed affluence previously unimaginable. American inventiveness and manufacturing put gadgets in our homes years before ordinary Europeans could contemplate owning them.

Mr. Bryson contends, however, that with the victory of the then 25-year-old Lindberg America came of age, taking center stage. Before Lindberg’s win, America lacked confidence, and the reaction to his win was, according to Bryson, completely out of proportion to the actual achievement.

Mr. Bryson seamlessly strings together these ostensibly unrelated events, creating a kind of drama and suspense that keeps the reader turning the page.

It was 1927, for example, when the great sculpture, Mount Rushmore, was begun. Presented as Mr. Bryson does it, one is left wondering how one could have missed connecting its epic grandiosity with a reassertion of American dominance in aviation.

Of course, America led the world economically, but Mr. Bryson is at pains to demonstrate that it was not until we took center stage culturally, with Rushmore and perhaps more significantly, The Jazz Singer, the first “talking picture,” that the American century truly got underway.

Mr. Bryson balances out these achievements with an equally fascinating exploration of the flip side of America’s vibrant maturation. He takes a long look at Al Capone, at a murder in Queens, and the execution of two hapless Italian immigrants demonized as anarchists and since forgotten.

His chatty, charming style, and his consistent humor carry the reader along, allowing us to take the leap of faith required to connect the dots between these disparate events. An adapt biographer, the author’s account of Henry Ford is fascinating, leaving the reader scratching his or her head wondering how such a limited man could become one of the richest and most influential industrialists the world has ever seen. He shows us how Ford’s inventing the Model T proves it’s not how much you know that counts, but how useful the little you do know can be.

This work seems to be the result of Bill Bryson casting his eye over the 20th century, The American Century, and asking When? Who? Where? How? and Why? And it is perhaps only with hindsight and the insight of this very observant author that it is possible to make the argument so convincing that “when” was the five months from May to September 1927, “where” was over the Atlantic, and “who” was the eclectic cast of characters assembled in this book.

With a literary batting record akin to Babe Ruth’s, one could imagine Mr. Bryson might miss an occasional ball, but not so. One Summer is highly recommended.

Jillian Abbott teaches was a contributing op-ed writer at The Australian and has written for the Washington Post, the New York Daily News, The Independent (U.K.), and The Writer magazine, among other outlets. She was chair of the Hammett Award Reading Committee 2011 and a judge for the International Thriller Writer awards for 2011 and 2012. Her short stories have won awards and have been published the U.S. and Australia, including in Queens Noir. Her interactive iBook/app Air Quality will be available in the iBook Store in April 2013.