One-Pot Dishes for Every Season: Over 100 Delicious Recipes 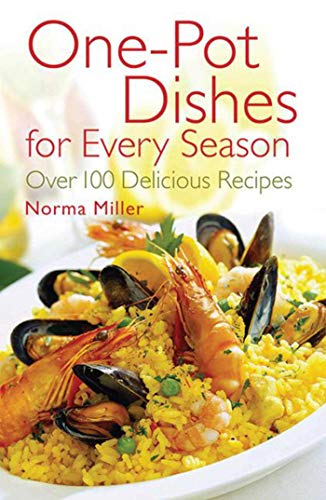 If “one-pot dishes” makes you think just of soups and stews, One-Pot Dishes for Every Season aims to widen your horizons.

Author Norma Miller defines these as “dishes prepared with just one pan,” and for the most part, that holds true (that is, they are, in the end, cooked in one pan—excluding bowls, plates, and dishes you may need for prep). Some of the dishes can be considered “supper in a pot,” with little need for other side dishes, but many cannot stand alone. Desserts seem slightly odd here; cakes, pies, and cheesecakes do, indeed, cook in one pan, but they don’t seem to fit the usual one-pot idea.

Cooks with access to less-common ingredients will find some inspiration in these British recipes, with suggestions for venison, mutton, kidneys, pheasant, guinea fowl, nettles, marrow, and gooseberries. But there are also many recipes for chicken, pork, turkey, and lamb, with vegetarian options sprinkled throughout.

Corn cooked with a sticky glaze of honey, peanuts, and sesame seeds (tested with frozen corn) made a nice change from plain corn on the cob, the crunch of the peanuts adding texture to the soft corn. Pork chops topped with little balls of stuffing scented with lemon and tarragon and glazed with cooked tomatoes and plums (not tested) put a lot of flavor in one dish, as do sausages cooked with onions and leeks, black-eyed peas, and apples, all flavored with molasses and smoked paprika.

A potato cake of grated pumpkin, carrots, and sweet potato, mixed with a touch of allspice and ginger, will make a flavorful and more healthful alternative to standard Swiss rösti, and a quick supper when topped with poached eggs. And a wild mushroom stroganoff, served when tested over grits, gets a boost from saffron and Parmesan, and would be delicious as a crepe filling or over baked potatoes.

Bolognese sauce, rich with beef, pancetta, and cream, made a hearty and filling supper with thick noodles stirred in (note that the directions don’t say to remove the bay leaves before serving, nor when to add the red wine, though that will be obvious).

This quirky book makes some attempts to translate British food writing into American, but it only half-succeeds. “Pancake Toasties with Prawns and Mozzarella” says that prawns equals shrimp, but fails to define pancakes (presumably, crepes). Other recipes call for “Chinese leaves,” “gammon steaks,” and “coloured hundreds and thousands.” An abysmal index only makes matters worse, with nothing more than a list of the recipe titles.

It’s jarring, also, to see bouillon powder and cubes called for in recipes meant to celebrate fresh, seasonal ingredients. For a vegetable risotto, is it really that much harder to boil a pan of stock than to use cubes and boiling water?

Mostly, though, the book sticks to fresh foods and avoids convenience products. For quick recipes with generally short ingredient lists, tailored to the seasons and offering some variety from standard American food, One-Pot Dishes for Every Season provides worthwhile supper suggestions.