One Person, One Vote: A Surprising History of Gerrymandering in America 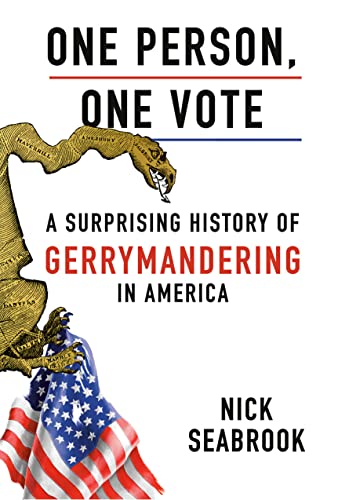 “The author has a specific agenda about gerrymandering in our time, but he makes his points with engaging historical-political storytelling.”

The United States of America was founded as a Roman style republic led by white men who feared the passions of the public who had, in fact, created the new nation by revolution. One of the last means of controlling and thwarting the will of the electorate has become gerrymandering or the “intent” of “manipulating” political “boundaries” in order to influence an election’s outcome.

Nick Seabrook, in his second book on this subject One Person, One Vote begins with the critical elements. Gerrymandering “may not always be partisan” “but it is always political.” It involves “a concerted effort to make the votes of certain groups of individuals matter than the votes of others.”

Elections are never perfect and can involve “all manner of examples of unfairness, inequality, and injustice” without involving conspiracy or criminal actions. “Demonstrating corrupt intent in these circumstances can be a challenge.” Boundaries can be set to guarantee that minorities have representation.

Seabrook writes “gerrymandering is an unnatural creation, a violation of the norms, procedures, and conventions of a functioning democratic system.” It “as practiced today, is a uniquely American phenomenon.”

Much of One Person, One Vote, concerns modern abuses on behalf of Republican candidates, “a new phase of in the evolution of this phenomenon.” Gerrymandering, however, existed before modern times and even before Eldridge Gerry had his name given to a process that created a state senate district in Massachusetts in 1812.

This practice goes back to before the discovery of America to at least when the members of England’s House of Commons had boundaries of boroughs manipulated to stay in power despite population shifts.   It became known as the “rotten borough” system.

Political boundary manipulation to defraud voters transferred to English America. Seabrook credits its origins in the colonies to North Carolina’s colonial Governor George Burrington in 1731. Arguably without legal authority, the governor redrew boundaries and invented new districts for his colony’s Lower House to strike back at his enemies and gain control of the colonial legislature. His actions resulted in his recall.

Such Gerrymandering continued to the present time, in the new nation notably in Maryland, New York, Ohio, and Virginia. For over 125 years, states would sometimes create at large and multi-seat House members, exasperating the problem of politically manipulating boundaries. Federal efforts to create one district, one representative, failed.

The rotten borough received its new name in this country from the efforts of the Democratic Republican Party of Massachusetts that “utilized every tool in the book to manipulate the electoral playing field.” Governor Eldridge Gerry found such tactics distasteful, but he still signed the bill approving redistricting shaped like a salamander into law.

Gerry lost the governorship, his party lost the Lower House, and the legislature repealed the redistricting in 1813. He, like Burrington, had a highly controversial career, but his ended with the legacy of an infamous fraud named for him.

Seabrook does not provide a complete history of political boundary manipulation in the United States but does give examples in detail to illustrate how the legacy of such fraud influenced modern politics. The author has a specific agenda about gerrymandering in our time, but he makes his points with engaging historical-political storytelling.

From the history of Patrick Henry’s plot to deny James Madison a seat in Congress in 1788 and the Ohio gerrymandering of 1842, the author points out that “gerrymandering was very much the exception rather than the norm” and it seldom succeeded. Fraud could involve ignoring the county as the building block of redistricting and in failure to change to the boundaries at all.

Gerrymandering took other forms, Seabrook explains. Abraham Lincoln and his party created something different in granting statehood to underpopulated areas of the country in an effort to guarantee that the Republican Party would continue control of the Presidency and the Senate through the addition of Congress members in determining the Electoral College. Choice of presidents and vice presidents can affect election of House members.

The courts seldom interfered in these controversies. In Wesberry v. Sanders, however, the United States Supreme Court ruled that the states had to reapportion each district with each federal census every ten years. Here, Seabrook argues, began the new and unique use of the legacy of gerrymandering to influence the election results nationwide

The resulting battles from new twists on old problems now take place at polling booths and in the courts. Modern gerrymandering has combined with issues like immigration, money in the media, etc., to become “intensely partisan along party lines.”

Avoiding the politics of redistricting, for example, created the opportunity for “the temptation for politicians to allow partisan considerations to dictate the redistricting process.” For example, “racist state legislators began to realize that the gerrymander presented them with a unique opportunity to reestablish barriers to African American voter participation.”

One Person, One Vote educates on many levels but as valuable as the parts, the whole proves the most important. It is thought provoking and well-reasoned. Using pertinent but largely forgotten entertaining stories of the past (including in recent times), Seabrook makes solid arguments about the present in American politics but especially for the reader with an open mind!

Readable but well-researched, One Person, One Vote has annotation and a bibliography. The book has appropriate illustrations and maps.