One Nation Under Baseball: How the 1960s Collided with the National Pastime 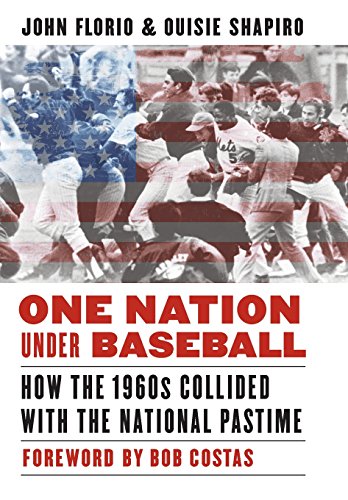 For those who lived through the sixties, this account of some of the major events and people of the decade is certain to resonate. For those who were baseball fans or simply sports fans it will resonate deeply. For those who do not remember this decade and know it only from films or family stories, reading this book will be a very good introduction to the sense of wonder and division that was so much a part of the sixties. It will not explain the decade to those born after 1965, but it will describe it quite vividly.

In One Nation Under Baseball John Florio and Ouisie Shapiro deftly recount many of the markers of a decade that exceeds our present sense of division as a nation. For some the sixties was a time of excitement, crisis, and revolution across the sweep of popular culture and politics. For others it was a decade in which the values of the Cold War generation were shattered in dramatic, and at times, frightening ways.

David Zang in SportsWars, his brilliant collection of essays on the sixties, sees it at a time when the “American One Way” was defied and challenged. The resulting pluralism unfurled across the culture in fashions, lifestyles, and with the crumbling of absolutes.

Baseball is central to the narrative thrust of One Nation Under Baseball, but other sports share the limelight in what is a series of anecdotes and vignettes flowing in chronological order across a decade of American history. Some of the essays are short and do not obviously relate to one another. Some do not address baseball as boxing, football, and the Olympics are all involved in the many collisions during the sixties. The central issues outside of sport are the Civil Rights movement, the war in Vietnam, racial and political violence, and the transformation of journalism by the rise television and new automated technologies.

Florio and Shapiro open with a story of “Mudcat” Grant’s phone call from presidential candidate, Sen. John Kennedy, Jackie Robinson’s distrust of the Senator and endorsement of Richard Nixon for president, and the arrest of Martin Luther King at a sit-in in Atlanta that resulted in a sentence of four months at hard labor. At this point, Kennedy, at the urging of aides Harris Wofford and Sargent Shriver, telephoned Mrs. Coretta Scott King and offered to do whatever he could. Despite the urging of Jackie Robinson, Richard Nixon refused to make a similar call. Some see this as a critical turning point in the 1960 campaign.

Florio and Shapiro then turn their attention to segregation at spring training in the Sunshine State. Hotels, restaurants, ballparks, and all the other appurtenances of Jim Crow greeted those who came to play, report, or watch baseball.

The legendary New York sportswriter, Dick Young, of the Daily News, is used to illustrate the changes transforming journalism. A new generation of sports reporters who are younger, often glib and cynical, and understand how television has changed the landscape produce a new style of journalism. Young and his generation are diminished by the change.

The flow of the early chapters is halting. Connections and transitions are not clearly drawn as it is not enough to simply lay things side by side. There is a paucity of analysis. Patience however is a virtue, and it will pay off when Florio and Shapiro hit stride just about a third of the way in. The writing becomes crisper and the pull of the storytelling gets stronger.

Among the best portraits of star players are those of Sandy Koufax, Bob Gibson, and Denny McClain. The Koufax material, including his contract holdout with Don Drysdale, is interspersed with the Watts riots of 1965. The traumas of 1968 including the assassinations of Martin Luther King and Robert Kennedy, the protest by John Carlos and Tommy Smith at the Mexico City Olympics, the violence in Chicago during the Democratic convention, Jose Feliciano’s rendition of the national anthem at Tiger Stadium before the fifth game of the World Series, are wrapped around two excellent portraits of Bob Gibson and Denny McClain.

This story of a tumultuous decade ends at the Supreme Court where Curt Flood’s attempt to end the reserve clause in baseball ends, and where Muhammed Ali’s fight over his refusal to comply with the draft on religious grounds ends in victory.

In the end Florio and Shapiro have captured the essence of the decade offering some compelling stories of the events and people. Sport historians may find it lacking in nuance and analysis, but for those interested in sport as a component of society and those who appreciate good writing on sport, this will be a very satisfactory read.