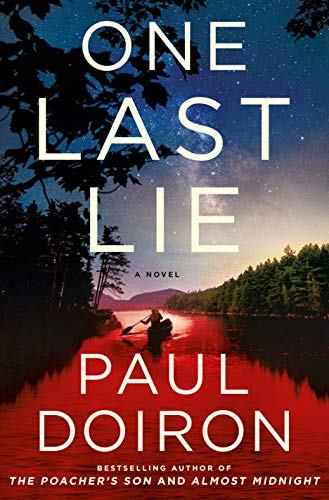 Before you read this book, clear your schedule. It’s the kind of story best read in one gulp.

If you must read it in installments, short scene-centered chapters make it easy to break away, and good contextual narrative makes it easy to pick up again. Still, the interest value and the tempo demand attention, so give it if you can.

One Last Lie is book 11 in the compelling Mike Bowditch Maine Game Warden series. It keeps getting better, rising to the top of the outdoors crime genre.

In this volume, Mike is established in his investigator position after tumultuous years in the field as a hot-headed warden. The warden service, unknown to some, is an arm of law enforcement. Usually it attends to violations pertaining to outdoor sports and recreation—fishing, hunting, camping, poaching. But sometimes it gets involved with human-to-human violations, such as murder.

That’s usually the case in a Mike Bowditch adventure.

This time around, Mike’s focus is his mentor and surrogate father, Charley Stevens. The no-longer-young but still bulldog Stevens abruptly breaks his behavior pattern of decades and vanishes after leaving clues indicating he might have gone rogue.

Mike can’t believe it. “In the seven years we’d known each other, Charley had conducted the equivalent of a Ph.D. program in the flora and fauna of the Maine woods. He had taught me how to do my job, enforcing the state’s laws while staying true to my inner compass. Most importantly, he had instructed me in what it meant to be a man in a cultural moment when masculinity was presumed toxic until proven otherwise.”

Yet nothing explains Charley’s behavior. And even though a letter Charley leaves behind demands that Mike not pursue him, Mike knows that’s exactly what Charley is begging him to do.

As throughout the series, pursuit of an intense personal matter puts Mike’s career in jeopardy. He must choose between duty and loyalty to find out what the heck happened—and make it right, if he can.

Charley’s disappearance traces back to a cold case he was involved in 15 years earlier. Folks in both the warden service and the deep woods of borderland northern Maine have long memories and keep their secrets close. For Mike blundering along Charley’s half-trail, it’s like walking through a field of landmines.

Complicating this challenge, Mike has woman troubles. After a long and tortured relationship with Charley’s wild daughter, Stacy, Mike has found a better-balanced affair with Dani, a colleague in law enforcement. But she is suddenly dropped by an illness into serious condition. Right when Mike most needs to be by her side, it is crucial that he be hundreds of miles away on Charley’s trail, keeping him alive while Mike’s former boss and medical teams keep Dani alive.

And then there’s the environment. What makes this series work more than character and plot is its embeddedness in the Maine wilderness. On one level, it’s personal: “Being outdoors was the only reliable way I knew to quiet my troubled mind.”

On another level, it’s a requirement of the genre that dramatic scenes and especially the climax of the story occur in the wilderness. The environment might be benign or hostile, but it always plays into whether characters win or lose.

Doiron’s signature style is how he blends environmental details into the narrative. This occurs not just in dramatic scenes but also in benign transitional moments. Early in the book, when he’s investigating a warden candidate from Florida, when stepping out of his vehicle and moving on in the scene he notices: “The frogs were making deep, resonant grunts like an orchestra consisting entirely of tiny bassoons.”

Later in the story, on an airstrip, his peripheral senses observe a bird going for a worm. Throughout, owls swoop past, plants and critters appear and disappear in fleeting glimpses, fronds kiss his face, insects chew his skin, other invisible things caress his ankles—or trip him—keeping the reader solidly and consistently planted in place.

Nature is both beautiful and hostile, and that paradoxical quality never quits in these stories. In this one, the lesson is more about human relationships. Mike’s past, present, and future crash together, and while galloping through the case he defines his choices and philosophizes about them. This is another signature trait of the author. He manages to inject pretty deep stuff in the flow of an action plot.

“My love for the old man was close to unconditional. But this day signaled the end of my apprenticeship. I had no doubt that Charley Stevens would continue to teach me life lessons, but only small boys and fools worship other men. The point of life is to find heroism in yourself.”

And Mike Bowditch does, but at a very high cost.