The One That I Want: A Novel 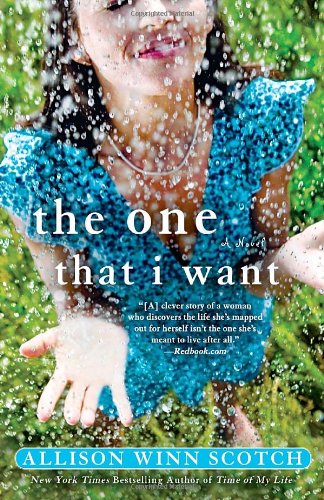 “. . . I wonder if being too satisfied with your life and becoming numb to it aren’t somehow intertwined. Like there isn’t something just as dangerous about playing it safe.”

It’s odd to love a novel by a writer and then be disappointed by her next effort. That is the position this reviewer is in with the release of Allison Winn Scotch’s The One That I Want, which follows her very successful Time of My Life. Life was a glorious read with a plot that was a variation on the storyline in the film Peggy Sue Got Married.

In Scotch’s novel, a young woman isn’t sure that she’s made the best choices in her life and wishes she could return to a certain point in her life. In Time of My Life, the protagonist Jillian Westfield is a 34-year-old woman—married, with a husband and a toddler—who is permitted to return to the age of 27 (her life becomes a “do over”). The reader follows along to see if Jillian can make better use of these seven years with the so-called benefit of 20/20 hindsight.

It was easy to identify with Jillian Westfield from page one and the story seemed to move along effortlessly. Author Scotch also provided the reader with some very nice insights such as noting that in romantic relationships, “One person is always changing too much and the other not enough.” Unfortunately, The One That I Want does not share the positives of Life.

In The One, our protagonist is Tilly Farmer, a 32-year-old young woman with the seemingly perfect marriage and life. Then everything falls apart, not gradually but all at once. If this were not bad enough, Farmer is given the gift of seeing the future, although it’s not a gift she welcomes. It’s an unpleasant gift, as her future looks bleak.

It’s obvious that Scotch has fashioned an inside-out version of her earlier novel here. But Tilly Farmer is hard to identify with—she’s externally forgiving of others’ faults but boils inside. This reviewer felt that he never actually knew the character even after 288 pages. There’s also the awkward means by which Farmer’s fortune-telling skills are triggered. It would have been easy to have her experience visions in her sleep or in daydreams. But no, Farmer must experience painful blackouts—she sees the future only while unconscious. Farmer pays for her views into the future by experiencing trauma, and this makes the reader uncomfortable and less willing to wait for the next such incident.

A number of things happen in this novel that strain credibility from the outset. But perhaps the key is that in Life Scotch wrote a complete story, almost as if it came to her all at once. With this story, it felt as if Scotch was writing it a line, a paragraph, a page at a time; the flow is not present. A number of the sentences are awkward and stiff, such as this second half of a long sentence: “. . . I realize that lessons are meant to be learned, honored even, or else you spend your life running so far from them that you erect a false existence around the very thing you should be embracing.”

Perhaps Scotch was just playing it safe here; in any case, this novel felt strangely numbing. It never came to life. Her fictional journey into the past in Time of My Life was satisfying in a way that The One That I Want—a journey into the future—is not. Apparently Jackson Browne got it wrong—it’s simply not easier to change the future than the past.