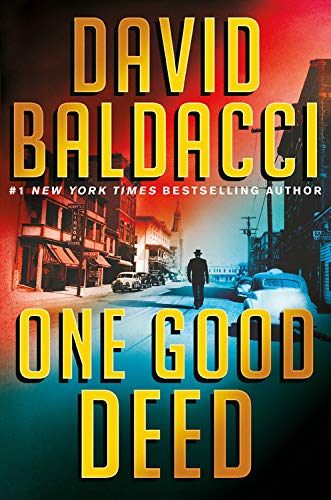 “Insightful and entertaining, Baldacci has captured the time and events perfectly with authenticity, beauty and flawless prose. . . . Gripping from beginning to end.”

“It was a good day to be out of prison. The mechanical whoosh and greasy smell of the opening bus doors greeted Aloysius Archer, as he breathed fresh air for the first time in a while.”

And so begins, what Archer hopes, is a new life away from prison cells, sadistic guards, and thuggish inmates.

It’s 1949, and war veteran Archer is released from Carderock Prison for a crime he claims not to have committed. He is in possession of a few dollars and the clothes he was wearing when he first went to prison, with a future not looking too bright.

His long dusty bus journey will bring him to Poca City, on parole, but with a short list of do's and a much longer list of don'ts: do report regularly to your parole officer, don’t go to bars, certainly don’t drink alcohol, do get a job—and don’t ever associate with loose women. Yes, you can breathe and eat, and go to the bathroom, occasionally, but even then, remember your dos and don’ts!

Poca City turns out not to be a city at all, but a small town with big designs on itself and hopeful aspirations for the future.

The town, however, quickly proves more complicated and dangerous than Archer’s years serving in the war or his time in Carderock Prison. His first port of call is with his parole officer, Ernestine Crabtree, a woman with her own hidden dark secrets and agenda. She reminds him of the rules, especially bars and women.

Disregarding Crabtree’s warnings, that same night, his search for gainful employment—and a stiff drink—leads him to a local bar filled with booze and women, where he is hired for what seems like a simple job: to collect a debt owed to a powerful local businessman, Hank Pittleman, by Lucas Tuttle.

Pittleman is seemingly impressed that Archer not only served in the war, but also spent time in prison. Obviously, a man who can look after himself, so to speak:

“A strong and brave man, then, who knows how to survive difficult circumstances. Which means you’re just the hombre for me.”

Pittleman takes out a wad of money as “big as a fist,” and from it offers Archer the sum of one hundred dollars—a significant amount to Archer—if he can find and bring back a Cadillac,being held by Tuttle.

To complicate matters, in the bar also, is Jackie Tuttle, reluctant “lover” of Pittleman, She just happens to be the estranged daughter of the person who owes the debt to Pittleman.

Like most of his life, it’s not too long before Archer soon discovers that recovering the Cadillac won’t be as easy as it sounds. Others have tried and mysteriously disappeared.

Lucas Tuttle has a furious grudge against Hank Pittleman and refuses to play along. When Archer shows up uninvited at Tuttle’s door, Tuttle greets him not with a welcoming howdy, but a rifle aimed directly at Archer’s most cherished and sensitive possessions, just below his waistline.

Adding to further complications and difficulties, Pittleman’s clever mistress has her own designs on Archer; and both Pittleman and Crabtree are keeping a sharp eye on him.

When a murder takes place right under Archer's nose, police suspicions rise against the ex-convict, and Archer realizes that the crime could send him right back to prison if he doesn’t use every skill in his arsenal to track down the real killer.

One Good Deed is filled with the aroma, sounds, hopes, and fears of post World War II America. Insightful and entertaining, Baldacci has captured the time and events perfectly with authenticity, beauty and flawless prose. Archer is a terrific anti-hero with plenty of longevity and originality built into him for future books. The supporting cast is just as memorable. Gripping from beginning to end.