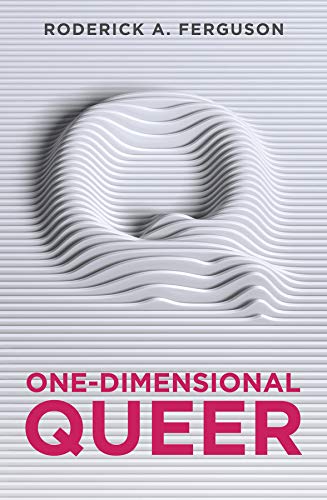 “One-Dimensional Queer raises provocative and important questions about the intersectionality of race, gender, and sexuality, and about the extent to which capitalism has determined the course of LGBT+ lives.”

There was a time around the Stonewall era when LGBT activists attempted to act in solidarity with feminists, laborers, and racial minorities in the hope that by working together they could not only achieve their short-term goals more easily, but could also work toward a total transformation of society, reshaping all norms of race, class, gender, and sexuality. Somewhere along the line, the coalitions fell apart, and the queer movement’s vision shrank, until a desire for social transformation turned into a desire for social integration, represented perhaps most concretely in the right to marry.

Marriage, of course, is an institution that is not just revered by the middle and upper classes, but is often held by them to be the defining institution of successful life. Marriage also implies (if it does not absolutely require) the concomitant goals of the monogamous couple, the appropriate number of children, and the house in the suburbs surrounded by the white picket fence.

While Duberman attributes the change to a failure of vision, Ferguson argues that the emphasis on marriage served the needs of neoliberal society by channeling economic energy where it would serve capitalism best. Capitalism thrives on standardization and mass production, and by incorporating middle-class gays into existing social and business models, their economic energy could be tapped with a minimum of disruption to the system at large. Indeed, their energy would enhance it.

Much of the book is concerned with how capitalism has flattened America’s vision of queer life, reducing it to one-dimensionality. Ferguson devotes a great deal of attention, for example, to Richard Florida’s, The Rise of the Creative Class, a book that urges city leaders to court creative people, artists, and gays.

Florida, however, takes a very narrow view of who those people are, explicitly defining them as the ones most likely to renovate houses, start businesses, and patronize specialty stores, rather than the ones who live in abandoned buildings, do drag, and hang out in sex clubs.

Ferguson points out that while Florida professes to embrace diversity, he explicitly warns of the dangers posed by too great a concentration of the nonwhite population, failing to realize that some people may be both creative (or gay) and nonwhite, and that some of those nonwhites may have been responsible for first helping establish a city’s reputation as a creative center. Ferguson argues that in following Florida’s model, and courting white, cisgender, middle-class gays, a neoliberal society has wrought violence upon other populations, leading to “the expulsion of disenfranchised people to the outskirts of city life.”

It’s an interesting argument, but while One-Dimensional Queer is long on theory, it is sometimes short on particulars, too often resorting to New York and San Francisco as signifiers of what can happen to immigrant, minority, and queer communities when the interests of capital drive them out of their homes and rising rents force their businesses to close. Gentrification and speculation have also driven many white heterosexuals to the outskirts, and when talking about the excessive price paid by queers and/or people of color, Ferguson offers little evidence other than the anecdotal. Some case studies or statistics would be nice.

It would also be nice to give attention to other cities. New Orleans, for example, certainly has its issues with race, gentrification, and income inequality, but it embraces the contributions of its people of color, its immigrants, and its queers.  Ferguson mourns New York’s loss of a free-wheeling sex culture that city leaders decided was too decadent to survive. New Orleans has an annual festival devoted to decadence. How is New Orleans succeeding while New York and San Francisco fail?

And how one-dimensional has America’s vision of queer life really become? Yes, thousands of cisgender, heteronormative couples have marched to the altar since Obergefell, many of them raising children and either gentrifying the cities or moving to the suburbs. At the same time, celebrities such as Laverne Cox and Chaz Bono have given the transgender population visibility that Christine Jorgensen could never have imagined, and Ru Paul’s Drag Race serves up regular lessons in bending gender. In terms of queer visibility, America sees much more than Modern Family’s Mitch and Cam.

Ferguson also overlooks the rise of social media and cyber communities. The sex theaters in Times Square may have been shut down, but surely Grindr has stepped in to fill the void. How does a book argue that queer life has been reduced to one dimension by a capitalist culture, without even once mentioning the role the Internet has played in preserving, creating, and fostering alternative visions?

One-Dimensional Queer raises provocative and important questions about the intersectionality of race, gender, and sexuality, and about the extent to which capitalism has determined the course of LGBT+ lives. At times, Ferguson analyzes them in depth and with insight. At other times, though, the book seems to rely on generalities and assumptions. Its goals are worthy. One wishes it could have been more consistent in its execution.