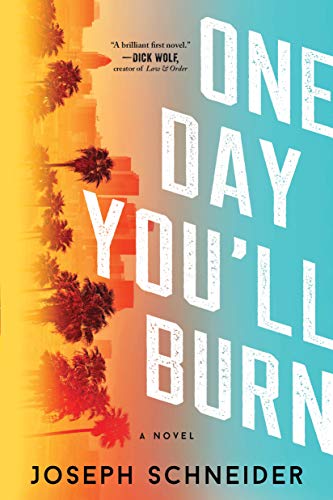 The Los Angeles Police Department’s Hollywood Division has undertaken a special project to revive their disbanded homicide squad by pairing two experienced veterans with two newly appointed rookie detectives who scored exceptionally high in testing but have little or no investigative experience.

The new squad’s commander hates the idea, but Deputy Chief Cynthia Comsky is determined to see her brainchild succeed. Caught in the middle of this rather bitter difference of opinion is freshly minted Detective Marcus Tullius Jarsdel, a.k.a. Tully. Dubbed “The Professor” by his partner, Morales, Jarsdel is a former post-graduate history instructor who speaks four languages and can read three others.

Joseph Schneider’s debut crime novel One Day You’ll Burn opens with Jarsdel coming face to face with a badly charred corpse dropped off in front of the Thailand Plaza on Hollywood Boulevard. The victim’s identity is a mystery, and no one seems to have seen anything useful.

As Jarsdel and Morales run down the thinnest of leads, they find themselves inexorably drawn into the seedy underbelly of Hollywood in which physical violence and gunplay are always just around the corner. Before they know it, they’re putting their lives on the line as the perpetrator of this horrendous crime sets sight on them in a desperate attempt to evade capture.

Although it’s a bit uneven in spots, Schneider’s first venture into crime fiction is a success. Jarsdel is a lead character who catches our attention right out of the gate. He’s as bright as a new penny and brimming with self-doubt, but his determination to stick it out as a homicide detective despite the objections of his gay parents and the scorn of LAPD veterans holds our interest throughout.

Not that he’s the sort of protagonist who won’t get under your skin from time to time. There’s no point in sugar-coating it—Jarsdel tends to be the kind of dickhead pedantic who runs his mouth too much and lives to regret it. He has a knack for alienating potential girlfriends by engaging them in adversarial debates on various academic subjects, and he’s overly analytical on the job.

This side of his character is deliberately drawn out, of course, in order to set the stage for a fuller understanding of his personal philosophy, which becomes an important theme as the story moves forward.

Jarsdel’s essentially a humanist who adheres to a Zoroastrian belief that our main purpose in life is “‘To be among those who renew the world’ and ‘to make the world progress toward perfection.’” Schneider does a nice job of playing this idealism against the grim reality of life as a law enforcement officer in the second-largest city in the United States.

Schneider’s a very good storyteller, but the novel must overcome an overly indulgent opening in which he leans rather too heavily on the gory details of the charred victim’s pathology, perhaps appealing to the noir crowd as a potential readership. Not long after, when Jarsdel ends his shift and goes home, Schneider makes a similar appeal to fans of Michael Connelly, an acknowledged influence, with Jarsdel’s solitary life and his predilection for esoteric music.

Nonetheless, as the story rolls and Schneider warms to his task, he moves us into territory we can much more easily see as his own. The characters work, and his use of setting effectively evokes a sense of Hollywood as a place of layers, combining tourist attractions, the film culture, con artists, and the inevitable gang activity.

One Day You’ll Burn is a successful debut, and Tully Jarsdel is a welcome addition to the ranks of crime fiction homicide detectives. Readers will enjoy this novel and remember Joseph Schneider’s name when the next installment hits the bookshelves.