One in a Billion: A Child's Life, a Mysterious Disease, and the Dawn of Genomic Medicine 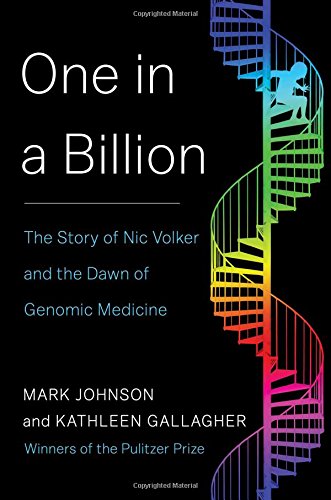 If there were a genre classification “nonfiction thriller” then this riveting book would be its bestselling headliner.

From the opening pages this needle-in-a-haystack tale keeps readers on the edge of their seats as they share the Volker family’s switchback ride to save the life of four-year-old son, Nic. It also clarifies for the reader in layman’s terms the recent astounding scientific leaps that were triggered in 1953 when Watson and Crick discovered DNA’s double helix. At the time even they never considered that one day it might be possible to read that code, but science has galloped on, and by the time Nic’s options were running out, new frontiers would be crossed to provide the life-saving solution to a never before recorded disease that had so far defeated world experts.

Nic Folker was just two years old when “a searing pain . . . signaled the awakening of a new and deadly disease.” Doctors discovered tiny pinprick holes were forming inside his intestines whenever he ate food.

For a kid who loved steak and pizza, tube feeding was a poor substitute. But it became a frequently used stopgap option for his life threatening condition, and while other two year olds might cuddle up to a teddy bear at night, Nic would slip into his dreams “clutching a bag of Bagel bites.”

Nic endured literally hundreds of operations, sometimes daily. He survived pneumonia and E. coli infections, septic shock, and on many occasions his mother AmyLynne was warned her son might not survive the night. Her indomitable spirit and determination to be involved with her son’s treatment never waned, with the feisty, well-endowed mom even undergoing breast reduction to ensure medical professionals took her seriously.

For two years no one could find “the reason for the havoc inside the child’s intestine.” They could tell his family what Nic did not have, but if they could not explain the disease they could not fight it. So the Volker family found themselves marking time in the cruelest way, living divided half-lives with mother AmyLynne anchored at the hospital whenever Nic was an inpatient (much of his life), while Sean held down a job as well as being father and mother to their three daughters, Mariah, Kristen, and Leilani.

AmyLynne recorded her family’s diagnostic odyssey in a revealing journal, never giving up on her son and refusing to use the “D” word, or agree to a “do not resuscitate.” She clung to the firm belief that someone, somewhere would save her son, and when Nic was moved to the Children’s Hospital of Wisconsin near Milwaukee, they finally got a break. Children’s is a leading pediatric facility that shares a campus with the Medical College of Wisconsin, where the Volkers found themselves blessed with an array of scientists and doctors who seemed to converge as if by destiny.

Committed to not only advancing the cause of science and medicine, but also desperate to save the life of this one very small child, the fight was on, led by pediatrician and scientist Alan Meyer and leading geneticist Howard Jacob.

They knew  “the next major scientific frontier following the completion of the Human Genome project” which sequenced the very essence of who and what we are, “was to figure out how to use our new knowledge to save lives.” They were about to make genomic—personalized— medicine a reality. Jacob had been “talking about bringing sequencing to the hospital by 2014.” But Meyer needed it now, not in four or five years’ time. And he got it.

But the sequencing of Nic’s own personal code was not the end of the problem. Once they had this mass of information, they had to identify which of the “3.2-billion-letter signature of this human being” was the “typo.” A yardstick was required, an “average” to compare with and find abnormalities.

A reference genome was created from the very small sample of completed sequences and incredible scientific investigation work by researcher Liz Worthey combined with this tool to identify the rogue XIAP sequence that was killing Nic Volker. A single misplaced letter was causing a different amino acid to be made. This altered a protein, a protein designed to “stop the immune system from attacking the intestines when food enters.” Slam dunk!

The quality of the authors’ Pulitzer prize-winning reporting has transferred effortlessly to this book, something not always easily or successfully achieved. They have balanced the need for facts with the depth of character and degrees of emotion necessary to engage the reader while maintaining a glimmer of optimism throughout the horrific times that confronted Nic Volker and his family.

Science continues to unravel the mysteries of our genes, and how what we inherit interacts with the world we live in. It is also struggling with how much knowledge and truth individuals and families can or should cope with.

“Taken together, rare diseases, most of them hereditary, afflict 25 million to 30 million Americans” so the ability of scientists and doctors to identify the “typo” in our genes opens the door to curing and perhaps even preventing so much suffering.

But as we are finally able to embrace the truth of who we are, for many the secrets of the double helix can be a double-edged sword.