Once Upon a Wardrobe 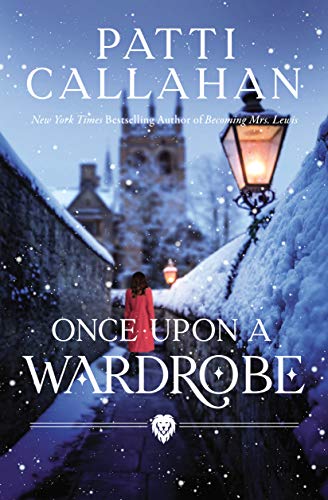 Once Upon a Wardrobe tells the story of the inspirational threads author C. S. Lewis wove together in his 1950 fantasy novel for children, The Lion the Witch and the Wardrobe. Author Patti Callahan unfurls the story through the eyes of siblings in two timeframes, maintaining a sense of awestruck wonder, while revealing the inner workings of the man behind the magic.

The story opens in idyllic, 1950 Worcestershire, England, at the bedside of eight-year-old George Devonshire, who suffers from a congenital heart condition that in no way dampens his shinning spirit. A voracious reader with an unstoppable imagination, George tasks his 17-year-old sister, Megs, a mathematics student on scholarship at Oxford University, with tracking down the university’s English literature tutor, author C. S. Lewis, to ask where the land of Narnia came from in The Lion, the Witch, and the Wardrobe.

Although she loves her brother to the point of no refusal, at first Megs balks and tells George that C. S. Lewis’s famed book is mere fantasy, but reconsiders when George says with heartbreaking sincerity, “I’ve thought about this a lot, and I think the world is held together by stories, not all those equations you stare at.” And so begins the journey of discovery that changes Megs by widening her focus from the neat grid of numbers and equations to the realm of uncharted imagination—all in the name of selfless love for her brother.

Snow is on the ground in the month of December when Megs follows C. S. Lewis to his house after one of his Oxford lectures. It takes her two returns to muster the courage to knock on the door, yet when she is discovered hiding on the grounds by C. S. Lewis’s elder brother, Warnie, she’s invited into the brothers' home to meet the great author and is received with open arms.

The magnanimous C. S. Lewis, known as Jack, understands the question Megs asks regarding Narnia on behalf of George, yet sets about answering it in a protracted way that requires multiple return visits. Rather than succinctly telling her where Narnia came from, Jack encourages Megs to form her own conclusion as he incrementally tells her the story of his own life. Jack says to Megs, “Who knows when exactly a story begins? Probably at the start of time. But maybe Narnia had its first seeds in a land that my brother and I imagined as children in our attic,” and adds, “Perhaps I was training myself to be a novelist.”

There are myriad mysterious influences that spawn a novelist’s inspiration, and Callahan suggests many with a gentle hand and deep wisdom through Once Upon a Wardrobe’s characters. With regard to the importance of reading, Jack tells Megs, “Every life should be guided and enriched by one book or another, don’t you agree? Certainly, every formative moment in my life has been enriched or informed by a book. You must be very careful about what you choose to read—unless you want to be stuck in your opinions and hard-boiled thoughts, you must be very careful.”

Because Jack suggests that Megs listen to his stories then go home and write them down from memory, each time Megs returns to the bedside of George, she reads from her notebook and, in time, surprises herself by developing the finesse of a seasoned storyteller. The series of stories she tells is fascinating in that they parlay the background and maturity of a world class author as he navigates the ambiguity of life’s tribulations. From the building stories she tells George of Lewis’s life, Megs realizes, “George’s imagination is taking him places while I ramble on about stories and facts about Mr. Lewis. George takes something of this world and travels to another as if the story world and the real world run right alongside each other.”

At 17, Megs centers her life on education and her beloved brother, but when she is befriended by Padraig Cavender, an Oxford student who hails from Northern Ireland, the wheels are set in motion to fulfill George’s only wish for Christmas, which is inspired by C. S. Lewis’s popular book, and results in a thrilling adventure to Ireland that illuminates the answer to George’s initial question.

The broadly researched Once Upon a Wardrobe is written in enchanting language apropos to the setting’s time and place and regales the reader with little known tidbits pertaining to the inspiration behind The Lion, the Witch, and the Wardrobe. With elegant prose, Callahan invites the reader to intuit creativity’s source. Once Upon a Wardrobe is a captivating story for all ages; a standalone book combining fact, and fantasy, and its peek behind the curtain crafting is an important adjunct to C. S. Lewis’s Narnia chronicles.