Once Upon a Time I Lived on Mars: Space, Exploration, and Life on Earth 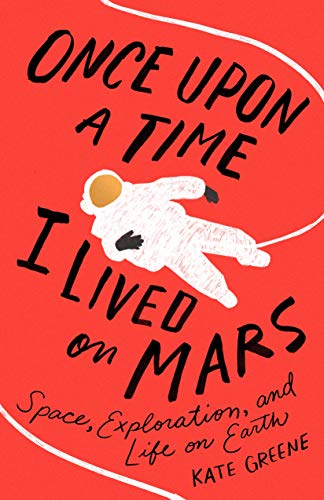 “a fascinating book that resides in the space between science journalism and memoir.”

In 2012, Kate Greene and nearly 700 other people answered a call for “almost astronauts,” people with technical skills, unruffled personalities, and optimism, to join the Hawai’i Space Exploration Analog and Simulation (HI-SEAS) to see how food might be pivotal in maintaining astronaut health and crew bonding during a long, isolation-heavy voyage to Mars and colony establishment. HI-SEAS is one of many analog mission sites in remote parts of the world, from Antarctica to underwater Key Largo, where space agencies and other organizations test the technical details and astronaut coping strategies that will determine the failure or success of deep space exploration.

Greene, a science journalist with a physics background who once hoped to be a real NASA astronaut, and her five companions entered a geodesic dome on the Mauna Loa volcano for “Four months of the same people, same seats at the table, same clothes, same smells, same routines, same view outside the one-and-only window looking out onto the same rocks. No sunshine on our skin, no fresh air in our lungs.”

While there, Green and the other crew mates participated in daily experiments related to food, odors, clothing, and other minutiae of life all-too-often ignored here on Earth. Greene covered her HI-SEAS voyage for Discover and other magazines, so for Once Upon A Time I Lived on Mars, she navigates a different route.

Noting that “much of Earth exploration has been rooted in colonialism and subjugation,” Greene pursues inquiries into the unspoken assumptions that shape everything from how space suits are designed to how brave people are chosen to fly rockets and guide space stations in the near-Earth yet still far unknown. Each chapter ruminates on astronaut life from astro-gastronomy in building community, to boredom and isolation, to what makes a vessel, to the ethics (or lack thereof) behind human experimentation, and many other topics. The result is a fascinating book that resides in the space between science journalism and memoir.

Greene hints at enormous life ruptures after her HI-SEAS adventure, including the end of her marriage and the death of her older brother, but she’s reticent to deeply explore these changes. Instead, Greene asks questions, many questions, but rarely hazards an answer, leaving her voice overshadowed by interviews and writing excepts from Mark Kelly, Mae Jemison, Michael Collins, and other lucky souls who journeyed far away and lived to tell the tale.

In the book’s more science-oriented sections, though, Greene is a deft and engaging writer with a strong command of her subject and a unique way of viewing the mountains of small details, panoramic imagination, and near-sighted vision behind space flight.

Nearly from its beginning, NASA had a bevy of science-based reasons to have women astronauts (fewer heart attacks and lower caloric needs, to name just two), but “having a non-male body disqualified a person as an astronaut until 1983,” when NASA sent Sally Ride into space, the same year that Guion Bluford became the first Black astronaut to go beyond the stratosphere. Also long sought were astronauts with “traditionally normative bodies” for space flight, but “there is nothing normative about a human body in space.” And who knew that from a historical perspective, private-funded explorations have traditionally outpaced public-funded ones in innovation, safety, and overall discovery?

Greene places space exploration in the long history, or perhaps the chronically unsatisfied itch, of humans venturing out to unknown places and then returning home. But, as Greene notes, “When an astronaut comes back, Earth isn’t where it was. The whole system has shifted from underneath and all around, which is of course just the imperceptible hurtling of our local galactic arm . . . But sometimes leaving is the only way to know it was ever home in the first place.”

Once Upon A Time I Lived on Mars is as much about being human here on Earth as it is about humans in space. Greene’s too brief book offers readers a chance for renewed awe at NASA’s tenacity and inventiveness, and a deeper understanding of the myriad ethical issues hovering behind space flight’s future.