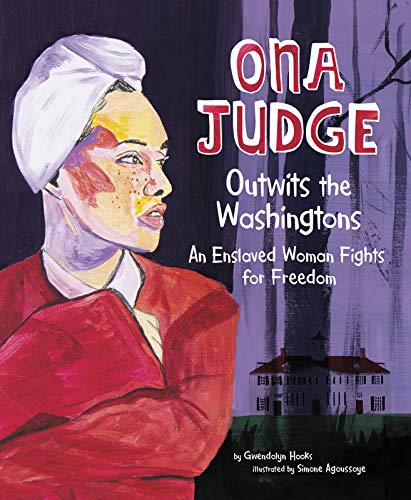 Gwendolyn Hooks has uncovered a historical gem in the story of Ona Judge, an enslaved woman in the household of President George Washington, the personal servant of his wife, Martha. Ona dares to run away and manages to establish a life as a free woman in New Hampshire.

Hooks balances the more general history of slavery with Ona's personal story, giving the young reader important information about how the newly “free and enlightened people” of the United States did not include the enslaved part of the population as citizens with equal rights.

There may be some confusion, however, that Ona knows that if “she escaped and was caught, she would be beaten. The Washingtons could sell her to a faraway owner. She could never see her family again.” Yet once Judge makes it to New Hampshire, the Washingtons can no longer “force Ona back.” Though Ona was still enslaved under law, “she lived her life as though she was a free woman.”

Would all states have allowed Ona that protection? Was New Hampshire one of the few or one of the many? This would have been interesting information for the Author's Note. Another piece of missing information is Ona's family. We meet her mother first, the woman who taught her the valuable skill of sewing. When the Washingtons move to the new capitol after Washington's election as the first president of the new United States, only a few of their enslaved workers are brought with them. Ona is one of them. Her mother is not. This is something not explicitly stated in the story. Instead, we're told “Ona was chosen to go along. Her brother Austin and five other enslaved people were also chosen.” This is the first the reader hears of Austin. Were there other siblings? A father as well as a mother?

The Author's Note answers the question about the father, a white indentured servant who gave Ona her last name. Was he also Austin's father? We don't know. It may be that this information simply doesn't exist anymore, but the Author's Note is the perfect place to bring up such questions, to make clear how much we know and don't know.

Ona's story is an important addition to our sense of early American history. George Washington is praised as the father of the United States, a heroic general and effective president. But he was also a slaveholder. At this time of reassessing our history to include all the people who helped make it, it's essential we expand our view to include other voices, like Ona's.