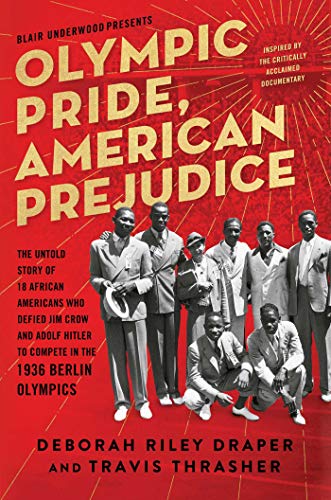 “Olympic Pride, American Prejudice should not be read so much as a diatribe against racial inequity, although those evils are clearly outlined, but rather as a lifting up and honoring of a remarkable group of men and women who proudly represented their country despite those inequities.”

When German heavyweight boxer Max Schmeling knocked out Joe Louis in 12 rounds in the summer of 1936, it fanned the fire of Aryan superiority kindled by Adolf Hitler. It would be two years before Louis got his revenge on Schmeling, this time before the end of the first round.

Fortunately, the world didn’t have to wait that long to see the fire begin to sputter, because the summer Olympics in Berlin were just weeks away, when a remarkable group of American athletes launched themselves from the starting line with metaphorical buckets of water to douse the flames.

Many know about the four gold medals Jesse Owens won in Hitler’s backyard at those Olympics. What has escaped notice for decades, though, is the story of 17 other African American track stars who won an additional 10 medals, smashing der fuhrer’s myth of Aryan invincibility. At long last, their story is told in Deborah Riley Draper and Travis Thrasher’s new book Olympic Pride, American Prejudice: The Untold Story of 18 African Americans Who Defied Jim Crow and Adolf Hitler to Compete in the 1936 Berlin Olympics.

Hitler promoted the Berlin Olympics as a showcase for his so-called racial purity message, but Cornelius Johnson ripped the façade from the lie by winning gold in the high jump while his teammate, Dave Albritton, won silver. In a fit of pique, Hitler deserted the arena rather than acknowledge their victory.

The authors tell us that, “It’s not difficult to imagine the man who believes Jews brought blacks into Germany to help ruin their race becomes a little irked to see the final outcome of the first day of his mighty Olympics.” But one of the tragedies of the story, besides going unknown by mainstream America for so many years, is that, while these athletes represented their country with character and dignity, that same country, to a large extent, had turned its back on them.

A good case can be made that this treatment by their countrymen was worse than being shunned by Adolf Hitler. For example, some of the athletes faced discrimination from their own coaches as when, in the 1932 Olympics, Jimmy Johnson was replaced on the 400-meter relay team by a white teammate, even though Johnson had qualified.

On the women’s team, two white teammates of Louise Stokes and Tidye Pickett ran in their stead despite qualifying times by both Louise and Tidye. And at a dinner honoring that year’s Olympic team in Denver, the two women were denied entry into the Brown Palace Hotel’s ballroom because “[t]he only African Americans permitted to enter it are those working as waiters.”

Worse yet, “[i]n 1933, the same year Ralph Metcalfe became known as the fastest man alive, the lynching of African Americans peaks with twenty-eight blacks murdered across the country. The lives of black Americans are riddled with fear, violence, and poverty as the Great Depression crushes the unemployment rate to 50 percent among African Americans.” Even in the years of the 1936 Berlin Olympics to 1938, there were still 22 lynchings.

And, as Jesse Owens, himself, said, “After I came home from the 1936 Olympics with my four medals, it became increasingly apparent that everyone was going to slap me on the back, want to shake my hand or have me up to their suite . . . [b]ut no one was going to offer me a job.” The authors said it best: The 18 were Olympic athletes in Berlin, “yet when they come back home to a segregated America, they go back to being Negroes.”

Olympic Pride, American Prejudice should not be read so much as a diatribe against racial inequity, although those evils are clearly outlined, but rather as a lifting up and honoring of a remarkable group of men and women who proudly represented their country despite those inequities. Some of them won medals while others did not, but the character they demonstrated in the face of adversity, and the examples they set, are far more valuable than gold.