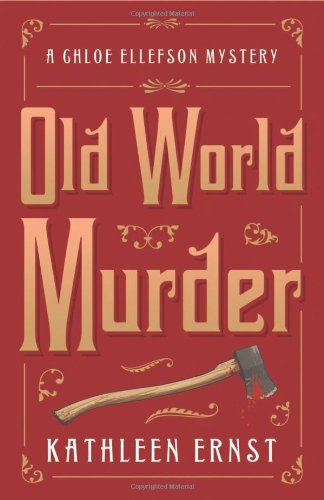 It’s 1982, and Chloe Ellefson has returned to her family roots in southern Wisconsin to restart her life as the collections curator at Old World Wisconsin, an outdoor museum with many buildings and exhibits showcasing the North European settlers of the 1870s.

She is trying to put the pain of a broken relationship and a miscarriage behind her, but misfortune follows her on the very first day of work when an elderly woman desperately asks her to return a valuable 19th Century Norwegian ale bowl donated twenty years before, in 1962. Chloe cannot fulfill the unusual request—a donation contract is binding and irreversible—but she earnestly promises to try to find it. A few moments later, the elderly woman is found dead in a mysterious car crash nearby.

The ale bowl must hold some dangerous secret, Chloe reasons, since someone else is clearly trying hard to hide the bowl’s existence or acquire the bowl, perhaps to destroy it. The donation record has been ripped from the record book, the collections trailer is burglarized, Chloe’s home nearly broken into, and as she further investigates the mystery of the bowl, she is intimidated by a rock through her window.

What is the terrible secret of the bowl, and why are people being killed because of it? And will she be fired (for being so distracted) or killed before she can discover the truth behind the artifact?

Chloe is assisted—reluctantly at first—by a new cop in the little town of Eagle, patrolman Roelke McKenna. A six-year veteran of the Milwaukee police force, Roelke is also trying to begin his life anew, hoping to escape the day-to-day brutality and banality of crime in the big city. Adjusting to life in rural Wisconsin is not coming easily, and relating to a small-town police station and a rural county sheriff’s department has its moments of competition, confrontation, and cross-jurisdictional cattiness.

Ernst’s first adult mystery (having written YA mysteries earlier) faithfully follows many conventions of the traditional “cozy” whereby a vulnerable but spunky female protagonist turns amateur sleuth by an unforeseen circumstance, applying her unique knowledge to the solving of a puzzle that local police aren’t quite able to comprehend despite their professional advantage in evidence-gathering and forensics.

In keeping with this tradition, the heroine develops a cautious relationship with a local cop, partly as a way to grant her access to information she otherwise couldn’t get, and partly to develop romantic tension.

The story unfolds through Chloe and Roelke’s perspectives alternating from chapter to chapter, nearly equally so, making them co-protagonists and mirror-images of each other. Chloe is an academic, a vegetarian with an independent feminist edginess and an elitist attitude, struggling with depression and issues with men (except her gay friend Ethan who phones her from Colorado occasionally to cheer her up).

Roelke is a masculine blue-collar cop and carnivore with a pick-up truck, obedient to authority but a confident self-starter, a loner who is nevertheless smitten by Chloe's blonde-and-blue-eyed Nordic beauty.

One might accuse Ernst of stereotyping her main characters—the “progressive” Chloe and the “traditional” Roelke, the country girl and the city boy—but each is complicated in other ways so as to make them complex and conflicted. Chloe is curious and terribly self-critical; Roelke is dutiful but finds himself bucking the system. Chloe can be funny; Roelke can be tender. The jacket copy will doubtless focus on Chloe, given the usual audience for “cozy” and “local color” mysteries, but the story skillfully blends and balances the two leads.

Old World Murder is strongest in its charming local color and genuine love for Wisconsin’s rolling hills, pastures, and woodlands. It is completely authentic in the names of towns and highways, the description of the UW-Madison campus and, of course, the portrayal of Old World Wisconsin. One learns quite a bit about such a museum’s collections, records, live “interpreters” and administrative politics. There’s enough about woodcarving, rosemaling, and embroidery and so on to give the narrative credibility and provide clues about the mysterious ale bowl’s significance. One can only imagine all the material cut by Ernst, an educator and social historian.

Frequently through the story, the reader might ask the same question Roelke repeatedly puts to Chloe: Why are you pursuing this issue? Chloe’s answer is always weak: Because I made a promise to the dead old lady to find the bowl. We might credit Chloe for her dogged pursuit, but it isn’t until we are half-way or more through the book that she has any personal stake in the outcome.

Mysteries of this kind have many difficulties for a writer to overcome and a chief one is the motive driving the amateur sleuth, who commits time and energy for a problem not her own—even placing herself in danger as a result. Plausibility is stretched in the story, but gladly not to a breaking point. Chloe is likable and layered so that we care for her outcome, if not so much for the outcome of the puzzle.

When the puzzle is resolved, it comes almost as too much of a surprise, as it does to Roelke himself. Readers want to be baffled until the ah-ha moment, but not be blindsided. Granted, it isn’t easy to play fair with readers and at the same time successfully conceal the who-dunnit and why-dunnit. Thankfully, the climax is suspenseful and arresting. One can be certain that with subsequent entries in this series, Chloe will become even more interesting as her own mysterious past becomes unraveled and Ms. Ernst’s confidence in this demanding (and often under-appreciated) genre grows.

For now, Wisconsin Badgers, UW alumni and, of course, Old World Wisconsin visitors will find Old World Murder a delightful distraction for an evening or two.