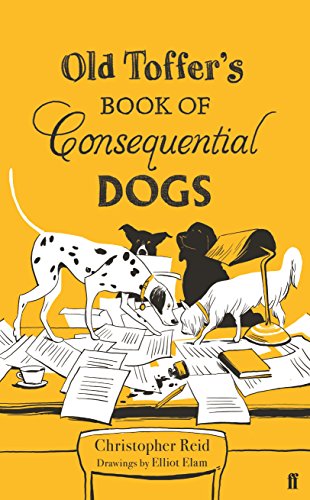 Dogs are running hither and tither, wild and free, as playful and mischievous as Elliot Elam’s scene on the cover of Christopher Reid’s Old Toffer's Book of Consequential Dogs. The poetic riot act sets up a canine cast of anthropomorphic stereotypes that pay homage to T. S. Eliot’s 1939 Old Possum’s Book of Practical Cats.

If “Old Possum,” the nickname dolled onto Eliot by colleagues around the printing press to tease him about his personality quirks, is to be a corollary to Reid’s “Old Toffer” the connection is not quite so obvious, at least not to audiences in the United States for whom a toffer is more of an unfamiliar analogy reference than is a possum. Unsure as to the meaning of the title “Toffer,” it is perhaps safer to assume that this nickname is intended as a parody, or a juxtaposition, or even just a play on words to the Old Possum.

What Eliot wrote in 1939 was essentially a reclusive erudite’s attempt at poking fun at the nature of the superiority of cat personalities. He was trying to entertain his godchildren. Not only did he succeed in this quite limited, quite personal purpose, he succeeded in entertaining Andrew Lloyd-Weber, who then cat-apulted Eliot’s little collection into the longest running musical in history: Cats, which subsequently entertained countless other god-children, regular children, and heck, even adults, becoming Eliot’s bestselling poetry.

In contrast we have Reid, given the British-gent’s superior toffer nomenclature, and writing about a hodgepodge mix of boisterous dogs. Instead of a lowly possum writing of the sophisticated self-assumed superiority of cats, we have sophisticated gentry writing about the happy-go-lucky pluckiness of dogs.

Elam’s illustrations steal the show. When all the rhyming and rhythm-ing gets to be too much, and not as varied as it could be, the black, white and gold interpretations are spot on. The reader makes the visual acquaintance of a book-smart Foxhound; a stolid sturdy detective beagle; a lap-spoiled Pekingese; and a spine chilling gruff-and-tuff sea dog as intimidating and ferocious as any skull and cross bones pirate. Elam’s calculated eyes and true to life posturing give a certain dramatic fervor to it all.

Coincidentally, Reid held a post as Poetry Editor at the very same Faber & Faber where Eliot himself once worked. Reid strives to follow Eliot’s style as close as possible to create a companion text to the Practical Cats, which Eliot himself planned to pen but never produced. A brave attempt to presumptuously step into the ranks of T. S. Eliot, Reid’s poetic nuances do not measure quite as skillfully crafted as Eliot’s might have been, but he is still able to pull out the embodiments of relatable doggie types. Although unlikely to attract a next-gen Lloyd-Weber, Old Toffer's Book of Consequential Dogs is a fun and lighthearted read.