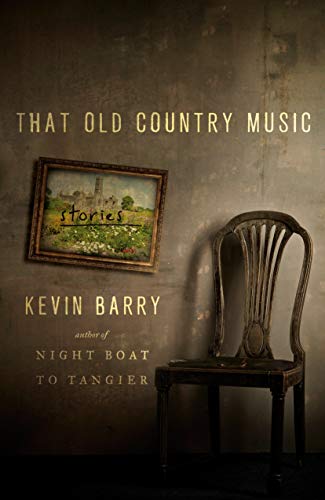 “recommended for readers who prize beautiful prose and story moments that linger.”

Kevin Barry is the award-winning author of three novels and three collections of short stories. The stories in this collection create a mosaic of the people and land of County Sligo in the west of Ireland. The land informs the people and the land through Barry’s coloration of its shades, trees, flowers, moods, and mountains in broad, heroic tones.

From “Ox Mountain Death Song:” “The day had the ominous feeling of such grey dense Sundays—it was sour with foreboding—as the vapours of paranoia floated in from Killala Bay, and the ridgeback line of the Ox Mountains lay prone, like a crouched beast, their tone dark bluish in the haze, sombre . . .”

Barry’s characters are painted in their smaller moments of yearning, hope and resignation, no one particularly announcing themselves. The policeman in the story is well described, but not with the same fullness as the land: “Sergeant Tom Brown did not drink. He suffered instead the terrible want of a sweet tooth. Sugar ran him. He sat in humid murk, himself vaporous, gently steaming . . . and he ate a Swiss roll. He looked at himself in the mirror—the big sticky face on it like a child’s.”

And the stories are generally of small moments in the lives of its characters. In “The Coast of Leitrim” a 35-year-old man takes up with a young Polish waitress he meets in a local café but can hardly bring himself to make a commitment. In “Deer Season” a 17-year-old girl wants to lose her virginity before she goes back to school in the fall. It happens easily with a man in his 30s, leaving her to wonder what all the fuss is.

Barry is an Irish writer, featuring mostly the country he lives in—and delightfully so—with even his written words carrying the lilt in the English language gifted to it by the Irish. In “Who’s-Dead McCarthy,” He’d come sauntering along at noon of the day almost jaunty with the sadness, the eyes wet and wide, and he’d lean into you . . .”

And Barry’s way with dialogue. Meeting a friend on the street, “Can you believe it?” he said. “A stepladder?”

And, this is, of course, the way any good storyteller would start, in the middle, ask the question, set the hook.

The most successful story in the collection is the title story because it marries Barry’s ability to created moods in the countryside to the moods of the characters. “High shanks of sunlight now breached the top of Forestry pines and showed a stretch of scarred hillside rising to Aghanagh bog.” Sets the scene for: “Lou-Lou Cryan was a hollowed woman now. She was like a reed from the drink and the nerves. She . . . came soft footed and stoically through the gloom of the pine trees to take her daughter in her arms. Oh you poor fool, she said, Oh you poor sweet fucking fool.”

In two stories in the collection, Barry employs uncommon narrative shifts to good effect. “Saint Catherine of the Fields” features a first-person narrator who describes his research into old-style Irish folk singing, visiting county pubs, and intermingling the song about Saint Catherine with the trajectory of his life. The decisions (in the song and the researcher’s life) are out there ready, on the air.

And going back to “Ox Mountain . . .” As Sergeant Brown pursues the outlaw Canavan, the author slides into a narrative where there are always lawbreakers like Caravan and pursuers like Brown. The current pursuit being but one in a line from the past on into the future.

Two of the 11 stories in the collection are something of off-notes. “Toronto and the State of Grace” is about a Canadian mother and son pickled and incoherent in an Irish pub. “Roethke in the Bughouse” is about an American poet’s breakdown in an Irish psychiatric hospital.

This collection of stories is recommended for readers who prize beautiful prose and story moments that linger.