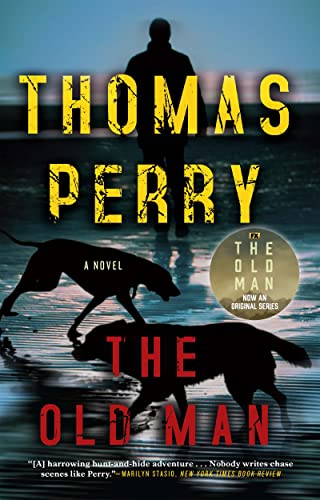 Why does a man who has been out of the game for 35 years suddenly become a red-hot target for a military intelligence section determined to remove him permanently from the playing field?

To all appearances Dan Chase is an innocuous 60-year-old man. A widower with a grown daughter off in the world living her own life, he lives quietly in a Vermont town with two big dogs, Dave and Carol. But when an intelligence contractor escorts two foreign assassins to Chase’s home in the middle of the night, Chase is forced to reactivate an escape plan he’d come to think he might never have to use.

The result is a relentless pursuit that takes him from Chicago to the Big Bear area in California, to Toronto, and ultimately to Libya where it all started and where he must finally end it, one way or another.

After more than 20 novels Thomas Perry has established a reputation as a reliable, craftsmanlike storyteller. His highly-entertaining Jane Whitefield series, which includes Vanishing Act (1994) and A String of Beads (2014), proved he could produce novel after novel featuring a fast-paced plot, a memorable lead character, and an unadorned, businesslike narrative style. In The Old Man he has proven once again he can also write standalone thrillers with action that moves so briskly your page-turning finger can barely keep up.

Dan Chase, also known as Peter Caldwell (Chicago), Henry Dixon (Big Bear), and Alan Spencer (Toronto), is a likeable protagonist the reader can trust to know what to do whenever it becomes necessary to do it. His tactical repertoire is inventive and entertaining.

Although most of the secondary characters in the novel are utilitarian at best, serving Perry’s various purposes as the story unfolds, a notable exception is Julian Carson, the intelligence contractor tasked to find Chase so that he can be eliminated. Perry takes several opportunities during the novel to move Julian out of the action so that the reader may study him not only as a reluctant participant in the hunt for the old man but also as an intriguing, multi-faceted character in his own right. Readers will hope—expect—to see Julian again in the future, preferably as the protagonist of his own thriller.

The only false note comes in a short chapter close to the end of the novel in which Perry reveals the background and motivation of Chase’s female companion. As an attempt to rationalize the decision of a random middle-aged woman to take up with a mystery man running for his life, it is such an obvious add-on that it stands out like a clown in a plaid sweater and hip-waders at a state funeral. Zoe’s motivation is definitely a problem for the reader as the story progresses, but this attempted explanation falls flat.

Otherwise, The Old Man is a rare exception among new publications from established bestselling authors we have come to fear may soon write themselves out. It is, as Nero Wolfe might say, quite satisfactory. If you enjoy thrillers, don’t miss this one.