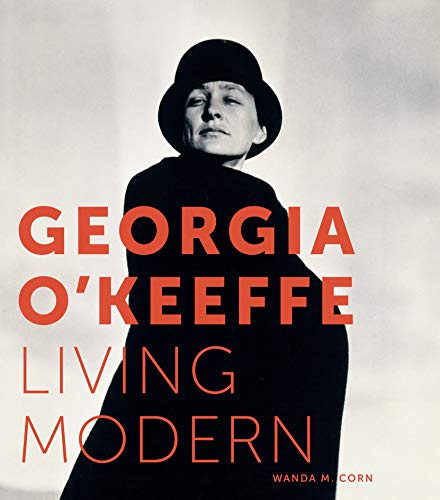 If one were to think that nothing more could possibly be written about the iconic Georgia O’Keeffe that hasn’t already been researched, analyzed, or discussed, then one has not yet perused this gem of a project.

Georgia O’Keeffe: Living Modern is an outstanding addition to the body of knowledge pertaining to O’Keeffe, presenting her in an entirely new and fresh dimension: her realm of fashion and lifestyle. Wanda Corn, a leader in the academic art history milieu, successfully presents her sartorial study in a relatable, understandable, and accessible manner.

The pioneering and well-documented argument that Corn develops is that while many previous historians have highlighted O’Keefe’s art or her biography, none have delved into her personal aesthetics, examined the way she lived, or considered the spaces she created for herself. O’Keeffe, Corn asserts, was very confident and secure with who she was and wanted to be exactly who she was, living according to who she was in every aspect of her life.

O’Keeffe was authentic and consistently claimed a professional image, artistic sensibility, fashion sense, and decorating style based on this authenticity. She “erased the boundaries between the making of art and the living of life.” Similar to Frank Lloyd Wright and Arthur Wesley Dow, O’Keeffe believed in “the fundamental idea that art, architecture, dress, and lifestyle should be one integrated system.” Corn makes a convincing case for how well O’Keeffe lived true to her ideals.

Organized in five main chapters, the book journeys, in chronological order, from the early days of O’Keeffe’s education, to her life in New York City, to her time in New Mexico, her travels around the world, and into her rise of celebrity—all the while detailing the clothing she wore and the interesting role that fashion played, as if it were a lead character in advancing the plot of her own identity formation.

Indeed, in the days married to photographer Alfred Stieglitz, clothing went hand in hand with modeling for his camera and establishing her personae as an artist. She allowed the camera to create for her an image that was part and parcel of her canvases. Her clothing and her “look” were an extension of the artistic design of her paintings. Several Stieglitz photographs illustrate this creative phenomenon. But the effect did not stop with Stieglitz.

Even as she moved on with her life in New Mexico, O’Keeffe, by then a successful artist and celebrity, maintained the same aesthetic approaches she had applied in New York. Her tastes were simple and consistent: She did not like clutter in her home and she wore only black, white, or blue clothing fashioned from the same cut pattern. Adamant in her refusal to compromise her preferences and exacting in her selections, her world was ordered exactly to her liking. And this is what is meant by living modern, unaffected by the conformities of the world.

Photographs of her years in New Mexico transport O’Keeffe out of the societal art circles of New York where she was one with her art and establish her connection with a geographic place where she became one with her surroundings. These images “helped her discard her New York self and reinvent herself as a denizen of the high desert.” Likewise, her artwork focused on her love of the colors, objects, terrain, and arid landscape around her home. She was portrayed both as “earthbound, domestic and creative,” as well as introspective, dramatic, and eccentric.

Far from being dualistic, these descriptions were, most likely, accurate characteristics of a complex O’Keeffe, as long as one’s impression is not based on one painting or one photograph seen in isolation, but rather on the context her every letter, artifact, relationship, and outfit. Corn comments more succinctly on “how much we miss of O’Keeffe’s artistic creativity if we study only her paintings and neglect her houses and her dress.”

One should not neglect this book. It is worthy of a read. This is not just a book on fashion, or home decorating, or art, or an artist’s biography. It is more of an intertwining of all of these human pursuits wrapped up in the example of one woman who managed to change the way people approach their personal aesthetics by doggedly insisting on being herself.