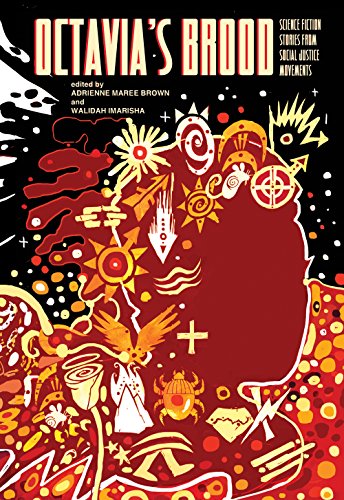 Octavia’s Brood is dedicated to science fiction writer Octavia Butler and seeks to draw connections between social justice and speculative fiction. In a collection of “visionary fiction” the contributors explore current social issues such as capitalism, climate change, gentrification, immigration, etc. through the lens of science fiction and with the goal of social change.

The collection is atypical in that its contributors are primarily activists. In the introduction, Walidah Imarisha asks, “Organizers and activists dedicate their lives to creating and envisioning another world or many other worlds—so what better venue for organizers to explore their work than science fiction stories?” The stories that follow suggest that science fiction or speculative fiction is indeed the ideal venue for imagining a world without war, violence, prisons, or capitalism.

The collection includes 20 stories and essays by Mumia Abu-Jamal and Tananarive Due as well as a foreword by Sheree Renée Thomas, editor of two collections of African American speculative fiction and an introduction and conclusion by the editors. I particularly appreciated Ms. Due’s essay, “The Only Lasting Truth,” which references her personal relationship to Octavia Butler while also putting Butler’s oeuvre in context. While I can appreciate why this essay may have been saved for the end of the collection, I would have preferred to have read it right after the introduction as it really sets the stage for the collection. Ms. Due defines speculative fiction while also drawing connections between Butler’s themes and the quest for social justice.

She notes, “nearly all of Butler’s fiction is about the Struggle, especially as it relates to the quest for change—either depicting change in the world of her fiction, or advocating for change in her creation of dystopian societies that feel eerily like ours.” This observation puts the stories in context, so that readers can fully appreciate how the writing may be seen as Octavia Butler’s legacy.

The first story of the collection is Bao Phi’s zombie story, “Revolution Shuffle,” imagines a future in which Asian Americans and Arabs are forced to work in camps designed to keep zombies away from the American public. Mr. Phi’s dystopic story; however, includes a glimmer of hope in the form of a war that might turn into a revolution. Similar strategies of hope in the midst of despair are evident in other stories such as adrienne maree brown’s “the river” and Walidah Imarisha’s “Black Angel.” Like Phi’s story, these are also standout selections.

Brown creates a haunting portrait of Detroit in her description of the river surrounding Bell Isle. She explores urban gentrification and the tensions with new folk who perceive Detroit “as this exciting new blank canvas” as if “the new folks just couldn’t see all the people there, the signs everywhere that there was history and there was a people still living all over that canvas.” But something mysterious happens in the river that gets people’s attention and sends the new folks packing, “so the city could survive.”

Imarisha’s story, “Black Angel,” depicts a fallen angel who intercedes in God’s plan because she can’t stand by while humans engage in genocide. It is this black angel who intercedes in the mistreatment of undocumented immigrants as she recognizes, “This place, this earth was pain, but it was also beauty and love.” The angel recommits to helping flawed humans because she is inspired by the undocumented immigrants’ attempt to save their children from Immigration and Customs Enforcement agents who planned to sell them all to death camps.

While I found the quality of writing exceptional from both of these veteran writers, I was frustrated by the novel excerpts as it was difficult to follow the storylines—especially in the case of Mr. Burton’s “Aftermath.” Mr. Bisson’s “Fire on the Mountain” was easier to follow, but I was left with the feeling that something was missing.

Despite some unevenness in the quality of the stories, Octavia’s Brood is an intriguing collection. The stories are meant to be thought-provoking and they do indeed lead one to imagine our future should we stay our current course. Mumia Abu-Jamal’s essay, “Star Wars and the American Imagination,” helps to make connections between themes in the stories and science fiction in general and societal concerns. This is a collection that offers much for anyone concerned about the state of our world.