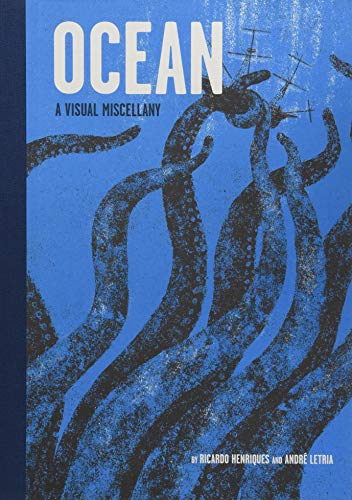 Ocean: A Visual Miscellany is a large book, surprisingly done in black and blue ink only, not what one thinks of when thinking of a book about some of the most colorful scenery on Earth. The cover has a matte finish and a solid blue library binding, perfect for a library reference book, except that it has no index or table of contents. It was originally published in Portugal in 2012, so this release is the English translation.

The book is packed with facts and reads like a report, starting with a two-page introduction that explains the difference between oceans and seas, that all five oceans are really one body of water, and that 97 per cent of the Earth’s water is found in oceans. The deepest point is called the Challenger Deep, with the average depth being two miles deep.

The next two pages discuss the five oceans and the 13 seas and gulfs. Pages 10 and 1 discuss watercraft, from tugboats to submarines. Pages 12 and 13 discuss parts of a ship. The book goes on to discuss stars and constellations, used for dead reckoning in early sailing. Then there is a page of activities for children to do, making a paper boat, tying knots, making a homemade compass.

The book touches on sailors’ food, scurvy, seasickness, and even sailors’ beards.

Another page shows traffic signals to use on boats. Then another page describes six kinds of knots. There’s a page on fish in the ocean, how to make your own iceberg, a recipe for Portuguese fish stew, and a sampling of fish names from the 22,000 varieties in the ocean. Two pages discuss other sea animals, and four more discuss tales from the deep. The book covers lighthouses, buoys, currents, and different types of waves. Then famous explorers get two pages. Icebergs and Peril at Sea come next.

It is a useful book, if not a pretty one. The facts are fascinating, and anyone interested in exploring the seas will find it worthy. Many a report will be written using the information in Ocean: A Visual Miscellany. If only it were more visually inviting.