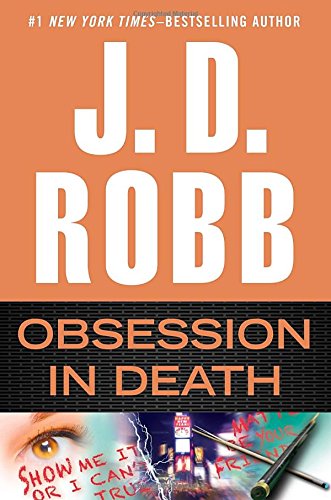 “a solid, entertaining story every time while demonstrating that good really can win against evil.”

The trick in writing series is to avoid boredom, for both author and reader. J. D. Robb has mastered this trick, using her In Death series to develop characters and relationships through fighting crime.

Now at volume 40, the series keeps getting stronger. Set in near-future New York City, each story opens with a murder and ends with its resolution. Lieutenant Eve Dallas, championing the victim, leads the chase supported by a loyal and colorful crew—including her non-cop husband, Rourke, once a street thief and now king of a financial empire.

In Obsession in Death, Eve becomes the motivation for multiple murders. Long-term readers might have wondered why Eve, because of her high media profile, case-closing success rate, and unwilling glamour, has never become a target for take down. This time we get that story, in a case of hero worship run amok.

Someone is killing people on Eve’s behalf, meting out “justice” to those who have disrespected her and gotten away with it. The crimes are so cleanly executed that Eve suspects the perpetrator is part of the system she upholds.

The story becomes a battle of wits between Eve and the killer, who signs off each murder as “Your true and loyal friend.” This person knows Eve well, knows her tools and methods, knows all the people she cares about and their vulnerabilities. Eve remains a step behind until she can isolate the element that will let her anticipate and capture.

Thus it’s as much a psychological story as it is a police procedural. Eve must wrestle with the blurry boundaries between professional dispassion and personal affront, while protecting her people against threat. She discovers just how far she has come from the abandoned, abused, mistrustful child she was upon recognizing just how important family and friends have become.

This change arises from her good luck in having a perfect partner. Rourke, who rose from his own mean streets, is endlessly supportive of “his cop” and helps her find the internal resources she needs to prevail. Their romantic marriage remains a theme of the series, showing the many ways partners can lift and balance each other—a refreshing change from the tales of marital ruin that abound in fiction.

Even better, despite the series’ touch of fantasy, the relationships and problem solving remain credible and thus inspiring. That’s why readers keep gobbling up these novels. They provide a solid, entertaining story every time while demonstrating that good really can win against evil.