The Obelisk and the Englishman: The Pioneering Discoveries of Egyptologist William Bankes 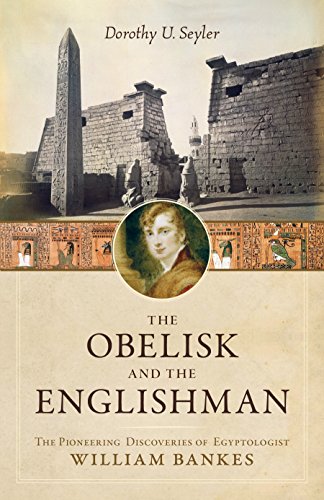 “Seyler conveys excitement and adventure from a lost story of a pioneer explorer of the Middle East.”

According to author Dorothy Seyler, the famous explorer John Lewis Burckhart noted "he could see that William [John Bankes] had the money possibly to avoid the worst hardships and the classical education needed to contribute to the world's knowledge of ancient ruins." Bankes’ journey in the second decade of the 19th century came just after the publication of the work of Napoleon's Egyptian expedition, during the era of the first great European explorers, and decades before the beginnings of modern Egyptology.

This story of this forgotten Romantic Era explorer began with his birth in 1786 as the second son of a wealthy Dorset family. Bankes had the best education for his time, starting with tutors then the prominent Westminster preparatory school followed by Trinity College, Cambridge, from which Sir Isaac Newton graduated, in 1803. Solid classical studies in Greek, Italian, and Latin no doubt encouraged his romantic dreams of the medieval cathedrals whose prints hung on the walls of his room.

His socially connected family were avid art collectors, and he was mentored and encouraged in his love architecture and travel by his great uncle Sir William Wynne, master of Trinity Hall. William's intimate friendship with Lord Byron, that lasted until the poet's death, began when they were students together with Charles Skinner Matthews at Trinity. Likely there William first introduced Byron to various people and poetry that made the younger Byron as much a protégé as a friend. Bankes did not mimic the gambling, drinking, and sexual encounters on the epic scale of his always broke friend.

The loss at sea of his older brother (men of that era, including William, did not seem to know how to swim) made William heir to a considerable family fortune. Graduating with a master’s degree from Cambridge, he took a "pocket" or pre-arranged seat in the House of Commons and drew from an annual allowance that would be something like $500,000 per year today.

In joining Parliament, William continued a family tradition in politics. His father would serve in the Commons for 50 years and, as a power broker through his tireless work, counted himself a friend to such leaders as William Wilberforce, William Pitt, and the Duke of Wellington (also an important friend of William, although William William preferred traveling across Great Britain to sketch its best in architecture to having to listen to long dull speeches in Parliament as a an MP).

William John Bankes' seven-year trip that the author describes as "the world of his fantastic adventures" began with Spain and Portugal in 1813, even as Europe lay still lay devastated in the last years of the Napoleonic wars. Traveling among armies, battlefields, Gypsies, plagues, sheiks, revolutions, and ruins, and often recklessly, he went on to Egypt, the Levant, and Syria, acquiring along the way a spectacular collection of carefully selected and at times pillaged art and antiquities, including an Egyptian obelisk. Some of the art proved to be wrongly attributed, leading to financial loss.

Of his long list of accomplishments, William John Bankes was one of the first Europeans to visit the ruins of Petra, to travel south of the Second Cataract of the Nile, and to explore the Temple Mount in Jerusalem. His detailed drawings contain now lost images and one that was pivotal in Champollion's deciphering of hieroglyphics. (Bankes refused to work with the Frenchman because of blatant plagiarism, as Seyler wrote "in William's world, travelers are befriended and information shared—until someone takes without asking or acknowledging the taking.")

Bankes met and was a comrade of many of the the legendary first explorers of Egypt and the Middle East including Giovanni Barzoni, John Lewis Burckhardt, Vivian Denon, Henry Salt, Lady Hester Stanhope, and others. Although he lived until 1855, he published little of his detailed notes and drawings perhaps because his notoriety as an explorer was overshadowed by all too public charges of homosexual propositions that resulted in his exile from Britain.

Although this book will not receive accolades for its prose, the narrative of the great seven-year journey is good, engrossing storytelling. It suffers from a lack of source material. (Bankes toured Greece and Macedonia in 1816–1817, for example, without leaving any real record. His family edited his papers including apparently even destroying letters from Lord Byron.)

The author, as common when working with limited documentation, in places tries to make too much from too little. Sometimes Bankes' itinerary, as given by the author, could be better explained to the less well-informed reader. Maps would help. Overall, Dorothy U. Seyler conveys excitement and adventure from a lost story of a pioneer explorer of the Middle East.