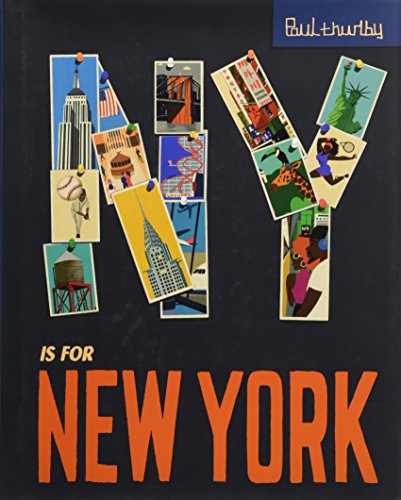 NY is for New York is not your average alphabet book. This is a multi-dimensional volume with beautiful graphics, fascinating arcana about New York City sites, and a “Where’s Waldo?” element that’s encourages both young and old to study the pages carefully.

The publisher rates it for ages four to eight. Four is probably a good starting age if the narrator sticks to the basics and skips most of the factual statistics, but this book will appeal to readers of any age.

Many factors set this volume apart from other alphabet books. First is the beautiful graphics, rendered in the Art Deco style of travel posters from the 1930s.

The simple lines and colors of the Art Deco style are compelling, and also apt since many of New York’s most famous historic buildings, such as the Chrysler, Empire State, 1 Wall Street, Bryant Park Hotel, 30 Rockefeller Plaza, and Radio City Music Hall were built in the Art Deco style in the 1930s. Even today, these historic buildings play a major role in defining New York City.

Secondly, the book is rich with intriguing information about the history and little-known facts about each alphabetically highlighted site. For example, the Statue of Liberty’s crown has seven rays representing the world’s seven seas and seven continents. The American Museum of Natural History contains more than 32 million specimens, making it one of the largest museums in the world. Grand Central Terminal is one of the world’s largest railroad stations with 44 platforms and 67 tracks; the Metropolitan Opera is the largest purpose-built opera house in the world.

Clearly New York City excels in superlatives. The Brooklyn Bridge is one of the oldest major bridges in the United States; the Empire State Building, once the tallest building in the world, has 103 stories and was built in just 410 days. The Metropolitan Museum of Art is the largest art museum in the United States and among the largest and most visited art museums in the world.

To add to the fun, and to make readers look more closely at each page, the author has hidden a gorilla image on each spread, inciting a search to see who can find each one. On the “I for Ice Skating,” (Rockefeller Center) spread, the gorilla stands out on the page, skating beside the humans. The wonderment of this oddity encourages readers to look back to earlier spreads to see if there are other, more carefully hidden gorillas they may have missed (some, such as the gorilla face peering down on the stage from the upmost tier in the Metropolitan Opera, are VERY hard to find).

In case the reader misses the gorilla’s recurring appearance, the author mentions in the afterward that he has hidden the great ape on each page. Look for the poor creature weeping as he gazes up at the Empire State Building, clearly pining for Ann Darrow, the character played by Fay Wray in the acclaimed 1933 monster film King Kong.

Find him in silhouette, seen from behind as he walks along a Subway train platform, and peering over a rooftop in a spread featuring New York City’s Water towers. (“Most buildings in the city taller than six stories need some sort of water tower to provide water pressure to the buildings’ residents.”)

With its beautiful graphics, fun factoids, and the hidden gorilla, this book is a keeper. It the first of a planned series that will explore major cities around the world. Coming out this spring is L is for London (a book originally published in 2015), followed by P is for Paris to be released in October 2018. If award-winning artist Paul Thurlby portrays these cities as delightfully as he does New York, this ABC book series could be a winner.