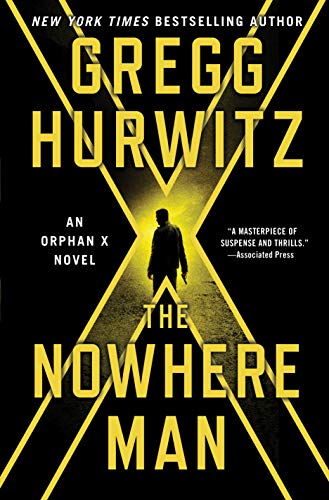 “The Nowhere Man is a good ride down a toboggan run of nonstop action and intrigue.”

Evan Smoak is Orphan X, the product of an off-the-books government program that developed young abandoned children into highly-trained assassins. But when his handler is shot and another Orphan is put in charge of rolling up the program and eliminating his fellow operatives, Evan disappears and reinvents himself as The Nowhere Man, working pro bono to assist innocent victims of crime and exploitation.

Picking up right where he left off at the end of Orphan X, the debut novel in this action/adventure/thriller series, Gregg Hurwitz thrusts his hero into another desperate situation as Evan is kidnapped and held for ransom in a chalet somewhere in a mountainous region in the dead of winter.

Although arch-villain René Cassaroy initially has no idea who he’s actually captured, the fact that Evan keeps killing off his seemingly endless supply of guards during his escape attempts suggests to René that there might be an even larger payday ahead—in auctioning off his captive to the highest bidder among Evan’s many enemies.

Although Hurwitz is a graduate of Harvard and Trinity College, Oxford, he is clearly drawing on his experience as a comic book writer (Wolverine, Punisher, Batman) to provide reading material to an audience less interested in Shakespeare or Proust than in Stan Lee or Robert Ludlum. His hero deliberately echoes Bruce Wayne/Batman, Frank Castle/The Punisher, Jason Bourne, and Jack Reacher.

His writing style is calculated to appeal to comic book readers, featuring a hip kind of prose that’s cool and entertaining, for example using nouns as verbs: “He stepped up toward the bars that were celling in his balcony” and “He can . . . distinguish mushrooms he can eat from mushrooms that will Cuisinart his kidneys.”

It’s also filled with technical details and highly selective references: his handgun isn’t his gun, it’s his Wilson; his refrigerator isn’t his fridge but his Sub-Zero; and his cellphone isn’t his phone, it’s his RoamZone. His handcrafted Swedish vodka is made from seven kinds of potatoes and distilled through a copper-lined still. His bed is a Maglev that literally floats two feet off the ground. Inundated by so much esoterica, the reader is soon willing to concede that our hero is a pretty cool guy, all right.

Hurwitz’s characterization is simple and uncomplicated. Evan is good, although somewhat conflicted, the bad guys are bad, and the guys you thought might be good guys usually turn out to be bad. For example, when it seems like former Orphan and current foe Candy McClure might be reconsidering her vendetta against Evan, the narrator spends little time in analysis: “Her conscience, long buried and atrophied from lack of use, rolled over in its sleep. She kicked it in the face and put it back down. It had no business being awake for what she was about to do.” That’s about as complicated as it’s going to get, sports fans.

The Nowhere Man has some very good touches, though. René’s sidekick and muscleman Dex is mute, but manages to communicate effectively through two tattoos on the backs of his hands, one of a smiling mouth and one that is scowling. At key moments he covers his mouth with the appropriate hand to express his state of mind. Although it reminds one somewhat of the Mayor of Halloween Town in Nightmare Before Christmas, whose head rotates between delight and terror, it’s still pretty cool.

Additionally, Hurwitz also obeys one of the most important rules in Hollywood and fiction when Evan must contend with two well-trained Dobermans—you don’t kill the dogs: “For a second he considered shooting them so he could rush after René, but they were dogs and even bad dogs deserved the benefit of the doubt.” Well done, Gregg. Well done.

At the end of the day The Orphan X series is clearly gearing up to offer the same kind of masculine, action-packed storytelling that made The Executioner and Matt Helm series so popular in their time. In the words of Charles Van Sciver, Evan Smoak’s primary nemesis, “It is what it is, and that’s all it is”—fast-paced, uncomplicated entertainment.

The Nowhere Man is a good ride down a toboggan run of nonstop action and intrigue.