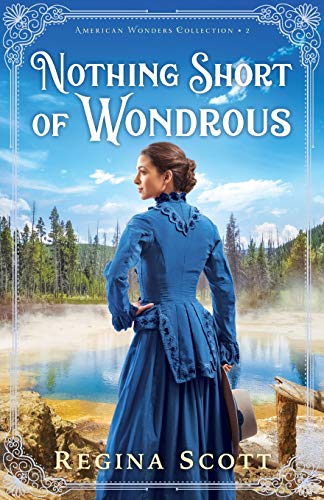 “The story should suit fans of romance, historical fiction, westerns, and anyone who loves a straightforward adventure tale about decent people striving together to overcome hardship.”

In troubled times, it’s nice to read a nice book about nice people. That idea may sound dull, but nice people have problems, too, and those can make for interesting and suspenseful stories.

Such is the case with Nothing Short of Wondrous, book two in the American Wonders Collection. Each of these historical romances is, or will be (book three is in the works), set in an important geological site in the American West. Book one in the Grand Canyon; book two in Yellowstone National Park.

But not the park we know today. Yellowstone was established in 1872—the first national park in the country—and at story time, 1886, it was still emerging as a tourist destination under conditions that were rude and crude compared to current sensibilities and comforts.

That’s what makes this a convincing historical novel. The author is a stickler for authenticity, and readers will get a strong sense of the raw environment along with how people of the day worked, lived, traveled, and viewed a national treasure.

The mores of the day are also clearly presented as drivers of the story. Kate Tremaine, a comely young widow with a seven-year-old son, has unusual independence because she was already running a hotel in the park with her husband when he died. Their lease is still valid, allowing her to keep operating—and now in charge.

But the lease is up for renewal, and a greedy developer wants it. There are a limited number of leases, and with the park’s growing popularity, they represent great economic opportunity for the lucky holders. The unscrupulous developer tries to push Kate out through vandalism, threats, and scandal. In those days, scandal was the worst of the dangers, for virtuosity and perfect comportment were a woman’s only true assets.

Thus Kate must remain properly dressed, ride sidesaddle, speak in a ladylike fashion, make no mistakes, and never be with a man unchaperoned or get around unescorted—despite the heavy work she must do and ground she has to cover.

This changes from a nuisance to a problem when the cavalry arrives.

The government has assigned the U.S. Army to patrol and protect the park since it’s become evident that security challenges are escalating along with traffic. However, the cavalry troops employed for this purpose have no legal authority and can only run poachers, despoilers, and troublemakers out of bounds.

The troops are also constrained by lack of information about the territory. A local guide and map provider are ideally available in Kate. She is reluctantly approached by Lieutenant William Prescott, in charge of the troop assigned to her sector. He’s lucky to have this position, because a tragedy earlier in his career cost him his higher rank and the coveted cavalry spurs that go with it.

He is so burdened by his guilty secret he can hardly lift his head. But upon meeting Kate, his chin snaps right up, and eyes pop open. He starts looking outside himself instead of wallowing in misery as she takes him through the many hazards the park offers: scalding mud pots and water pools, unpredictable geysers, earthquakes, grizzly bears, wildfires. The days of safe boardwalks and fencing are yet to come, and one wrong step off the trail can be fatal.

Kate can’t afford the time off needed to help the cavalry, but she does so anyway, recognizing the benefit from trading services. These strong men are willing to help her repair and maintain the hotel in exchange for her time and knowledge. Since her husband died, she’s been lacking the funds and manpower to keep the place competitive and retain a chance of holding on to her lease.

She’s been doing the best she can with her son and loyal employees, none of whom can bear the thought of losing the home and land they love. All are willing to fight for it.

Fight they must as the pressures to leave turn harsher. Kate and Will, meanwhile, have their own internal battles—against their growing attraction to each other. Both have secrets and shames they fear to expose, and both know that as an Army man, Will ultimately will be reassigned, and Kate won’t leave the hotel unless forced to. Will loves her enough to help prevent that forceful removal, even if it means losing her when he’s forced to move on.

The story’s suspense revolves around these two plotlines: Will Kate be able to keep her home, and can she and Will find a way to be together?

Many adventures, misadventures, and emotional ups/downs flesh out this dual plot, offering plenty to engross readers for 300 pages. Certain aspects of the story are predictable, but it takes an engaging (and scenic) route to get there. The story should suit fans of romance, historical fiction, westerns, and anyone who loves a straightforward adventure tale about decent people striving together to overcome hardship.