Nothing Personal: An Essay 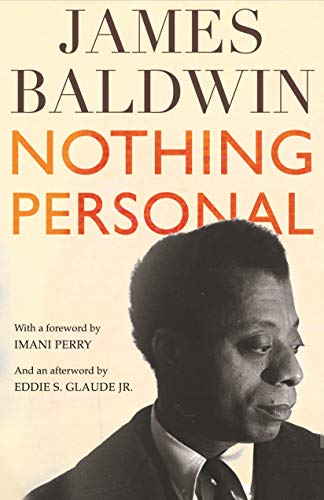 “In this short, stunning work, with his inimitable use of language, Baldwin distills the essence of his pain and wisdom and points a way for our own time.”

James Baldwin’s Nothing Personal, an essay of more than 20,000 words, first appeared as the text accompanying the photographs of Richard Avedon in a lavish 1964 coffee-table book. At the time, America was in upheaval. President Kennedy was assassinated the year before. The landmark Civil Rights Act of 1964 had just become law.

Baldwin (1924–1987), newly famous as an essayist and novelist, had just returned from exile in Paris to help lead the growing civil rights movement. Avedon (1923–2004) was a top fashion photographer. Both men worked together as students on the literary magazine at DeWitt Clinton High School in the Bronx. Years later, while photographing Baldwin for Harper’s Bazaar, Avedon broached the idea of collaborating on a book.

Nothing Personal, oversized and in its own white slipcase, features stylish photographs of such individuals as a naked Allen Ginsberg, a perplexed Marilyn Monroe, a cocky-looking Fabian, Alabama Governor George Wallace, Congressman Adam Clayton Powell. Jr., and a leader of the American Nazi Party, framed by Baldwin’s devastating account of the state of life in an unjust and disconnected America.

The book was pummeled by reviewers.

Critic Robert Brustein said “the people most likely to buy this extravagant volume are the subscribers to fashion magazines, while the moralistic authors of the work are themselves pretty fashionable, affluent, and chic.”

At the time, it was a not uncommon dismissal of white liberal concern for racial injustice. In fact, both Baldwin and Avedon were deeply committed to changing the nation’s racial dynamic. The New York Times reported that Avedon had photographed major civil rights leaders in the South in 1963 and opened his New York studio to photographers from the Student Nonviolent Coordinating Committee to train them to shoot rallies in a style suitable for mainstream newspapers.

Avedon also recalled the time as students when Baldwin visited him at home on East 86 Street in Manhattan. The doorman made Baldwin use the service elevator.

Nothing Personal has been reprinted in Baldwin anthologies. In this new edition, the four-part essay stands alone for the first time, with no photographs. There is a foreword from Princeton African American studies professor Imani Perry, and an afterword from Eddie S. Glaude, Jr., author of Begin Again, a book about Baldwin and his present relevance.

In light of the revival of interest in the writer’s work, this book will undoubtedly appeal to a new generation of readers. While it may not rival Baldwin’s finest essays, Nothing Personal is uncannily relevant and timely.

Overall, it is a forceful critique of a shallow society engulfed in “consumptiveness,” with little regard for reality, that lives “by lies” and “was settled by a desperate, divided, and rapacious horde of people who were determined to forget their pasts and determined to make money.”

The first section sounds a bleak note. Baldwin explains that he has sometimes distracted himself “by pressing the television remote control gadget from one channel to another. This may be the only way to watch TV: I certainly saw some remarkable sights.”

He refers to the banality of TV advertising: smiling faces, “teeth gleaming like the grillwork of automobiles,” “breasts firmly, chillingly encased,” “all sagging corrected, forever, all middle age bulge—defeated,” and so on, describing again and again the unrealities of American life, and “our absolutely unspeakable loneliness, and the spectacular ugliness and hostility of our cities.”

In an angry, meandering critique, he adds: “When a civilization treats its poets with the disdain with which we treat ours, it cannot be far from disaster.”

In the second section, Baldwin describes an encounter with police that might have occurred yesterday. He and a European friend were arrested on Broadway while looking for a taxi. He was asked “what I was doing around here—‘around here’ being the city in which I was born.”

The cop seemed “extremely disappointed” that Baldwin had no weapons, no punctured veins. “He said—how many times have I heard it!—that there had been a call out to pick up two guys who looked just like us.” And he gave Baldwin’s white European friend “a helpful tip: if he wanted to make it in America, it would be better for him not to be seen with niggers.”

Next comes Baldwin’s declaration of the need for love. It is “a miracle of coherence and release,” he writes. “It is the miracle of love, love strong enough to guide or drive one into the great estate of maturity, or, to put it another way, into the apprehension and acceptance of one’s own identity.”

He looks forward, across the years to our own time: “One day, perhaps, unimaginable generations hence, we will evolve into the knowledge that human beings are more important than real estate and will permit this knowledge to become the ruling principle of our lives.”

Finally, he writes that “one must say Yes to life and embrace it wherever it is found—and it is found in terrible places; nevertheless, there it is; and if the father can say, Yes, Lord, the child can learn that most difficult of words, Amen.”

His essay closes with a meditation on love as a way to escape “the prison of our myths,” as Eddie Glaude puts it in his afterword.

In this short, stunning work, with his inimitable use of language, Baldwin distills the essence of his pain and wisdom and points a way for our own time.